Agencies ask city to reconsider what is essential 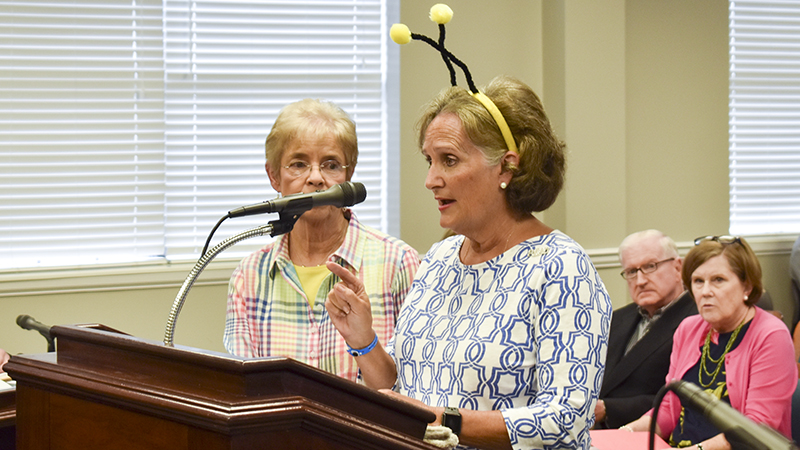 Debbie Burdette, the executive director of the Troup County Certified Literate Community Program, talks about the impact of the program on Tuesday. (Alicia B. Hill | Daily News)

The LaGrange City Council may have heard a record amount of public comment on Tuesday night, as representatives from various agencies requested that the city reconsider deep cuts to agency spending during the upcoming budget year.

The council discussed the budget in May, and decided on cuts to agency spending at that time. One of the reasons given was the increase that the City of LaGrange will have to make on utility rates in order to fund improvements to the utility system. The city does not charge a property tax, so utilities fund the majority of the budget.

“We are in a position where we are having to decide to vote in a rate increase on electrical and gas, and we are stewards of the taxpayers’ money here,” Council Member Mark Mitchell said. “We are having to make a difficult decision. We’ve got people on fixed incomes who have worked all of their lives who are sitting there and deciding ‘do I buy my medicine or do I buy a gallon of milk?’ You are asking us to give away their money to this program, and we have done that for a few years, but at what point do you plan on getting on your feet where you don’t have to come to the taxpayer?”

The council members all agreed that the programs that were not approved for funding did good work, but that fact did not change what was agreed on for the budget. On Tuesday, agency representatives argued that groups that incite positive change in the city should receive funding because of the impact that they have on the community.

Programs that requested funding for the 2018-2019 fiscal year that were not approved during the May meeting included First Tee, Certified Literate Community Program, Circles, Success by Six, Fellowship Deliverance, Literacy Volunteers of Troup County, Adaptive Growth & Cultural Advancement, CASA of Troup County, Get Fed Inc. and Calumet Neighborhood. Those programs totaled $263,531 of the requests, and the council agreed to decrease funding to other programs as well. Everyone who spoke thanked the city for its past support, but argued that funding for these groups is needed in order to continue to do their work to help the community.

“The funding that you have done for us and we hope will do for us is vital to the success, and we are just hoping that you will continue with it,” said Leon Childs of Adaptive Growth.

Many agencies argued that funding these programs is a long-term investment.

“My in-house accountant said that your return on investment would be around 350 percent,” said Debbie Burdette, the executive director of the Troup County Certified Literate Community Program. “Now, if we can invest around $200,000 [over more than a decade] and get that kind of return, let’s do it again.”

According to Burdette, when the CLCP began in 2002, 27 percent of the population of Troup County did not have a high school diploma or a GED. According to an update in 2015, that number is down to 18 percent. She also emphasized CLCP’s role in workforce development by encouraging students to graduate, which can result in an additional $10,000 in annual taxable income compared to a high school dropout. She said 7,000 people have received GEDs through the program, 200 scholarships have been awarded, 15,000 dictionaries have been distributed to local students and more than 3,000 books have been given to new mothers.

Other programs worried about the impact the cuts could have on local children.

“The [unfunded programs under United Way are] Success by Six, Literacy Volunteers of Troup County and Court Appointed Special Advocates. The total funding requested for these three agencies is $21,100,” said Patty Youngblood, the president and CEO of United Way of West Georgia. “… I want you to know the difference that these cuts will make to these agencies.”

Youngblood said that the funding for CASA was budgeted to recruit and train volunteers to support the 127 children in foster care in Troup County. There are currently 21 active CASA volunteers, with seven in training and 11 volunteers needed to cover the caseload.

The Literacy Volunteers of Troup County help adults learn how to read, do math and use computers in order to improve chances of being able to receive a job. The requested funding was to go to materials for the program and cover operating expenses.

“[Success by Six, a learning program of United Way] was begun in 2006, and just last year provided services that reached almost 5,000 children within the City of LaGrange,” Youngblood said. “… The return on investment in quality early learning programs is approximately $7 for every $1 investment. This savings comes in terms of higher graduation rates, more students who go to college, people who have fewer engagements with law enforcement, get better jobs, pay higher taxes. They volunteer at a higher rate as opposed to someone who drops out of high school, goes to prison, receives welfare, receives food stamps or subsidized housing or healthcare.”

Likewise, GetFed representatives worried about their ability to provide food for locals without assistance.

Quay Boddie of GetFed said that the organizers of GetFed often use their own money to keep the program going, and he hoped the council would reconsider its decision.

Some disappointment was also expressed that these groups had to learn that — what is in many cases the majority of their budget for the year — was denied from the newspaper instead of from a city representative or council member.

“I know everybody has a budget. I know you have to do certain things, but our board found out about this in the newspaper,” said Jeannie Smith, a board member for CLCP. “No one on this council picked up the phone or made any effort to contact Debbie Burdette to discuss that, and I think that is a little irresponsible.”

Because of the lack of notifications to agencies, a representative from the LaGrange Memorial Library attended the meeting to question if the library would receive funding. The library will receive  $36,000 in  funding during the 2018-2019 budget year, down from two years ago, but the same as last year.

However, the agencies who lost funding were encouraged to look elsewhere.

“Financially, we are in a squeeze. I implore all the groups who need funding for education to get the support of the [Troup County] Board of Education,” Council Member Nathan Gaskin said. “… You guys are doing great things supporting the board of education, and I ask you again, what is the board of education doing to support you?”

TCSO looks for suspects who allegedly tried to back…