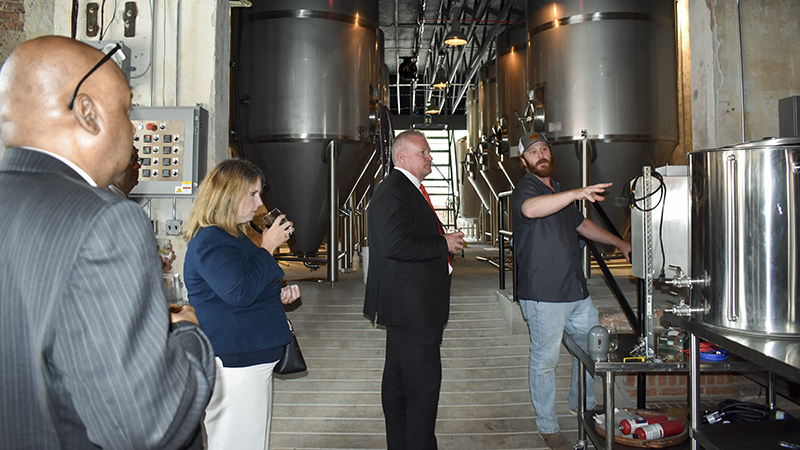 The LaGrange City Council enjoyed lunch and a presentation by DASH Neighborhood Revitalization on Tuesday at Beacon Brewing Co.

“My whole reason for choosing this spot was I felt like it was a good way for me to impact the Hillside community and put something back here, get some jobs over here,” said Chase Hudson, owner of Beacon Brewing Co. “It is designed to be a walking community, and it is the first step to making it a walking community again.”

Ricky Wolfe, a member of DASH’s board of directors, said creating a walking community is the only way that communities like Hillside could hope to be fully revitalized.

“Back in the 30s and 40s, there were 11 hillsides surrounding the City of LaGrange, and when I moved back, I saw the decay in those communities,” Wolfe said. “My thought was, if we don’t address that circle, then it has the opportunity to implode what is happening in the downtown area.”

The meeting was about a mile and a half from DASH’s first project in LaGrange, the Laurel Ridge Apartments, and following the lunch, the council toured the Tucker Cottages neighborhood and walked through Dunson Mill School, both of which now provide affordable housing for seniors.

“Those projects go from single family to multifamily tax credit projects,” Wolfe said. “You’ve basically got 200 houses over here [in Hillside] with many more to come, and we’ve got about 240 apartments around the City of LaGrange.”

DASH was founded in 2002 and has facilitated millions of dollars in projects in LaGrange.

“It took 16 years for [Beacon] to become a place where you can have lunch today,” Wolfe said. “We tried every way we possibly could to get private investment to move to Hillside because without private investment obviously, this has no chance of success.”

“One of the things that we’ve talked about a lot at the city is how to encourage more private investment, particularly in housing, whether it is multifamily or single family residential, but especially infill housing — housing in our existing neighborhoods where there is existing infrastructure,” LaGrange Mayor Jim Thornton said.

Wolfe had no quick fixes to offer, but he did note the role of neighborhood partners in bringing life back into local neighborhoods.

“We are fortunate in LaGrange that Callumet, Three Points and other communities have citizens that are saying, ‘we want to do something to revitalize where we live,’” Wolfe said. “What DASH wants to do is to serve as a coordinator of all of those events and share with them everything that we have learned and done.”

Those over DASH have found that there is more to improving communities then they suspected when they founded DASH.

“I was very naive about one very important part of this. This whole issue of substandard housing and affordable housing is far beyond my initial comprehension,” Wolfe said. “We spent $60 million in LaGrange, and the work in front of us is still tremendous. If you had asked me in 2002 — ‘I’ll give you $60 million, can you go solve the affordable housing issue in a community of 25,000 people?’ I would have said sure, no doubt.”

Wolfe helped get DASH off the ground in LaGrange 16 years ago, but he was quick to note that the support of the City of LaGrange is what has kept the project moving. DASH is separate from the city, but it does work toward solving housing concerns, one of the city’s most pressing issues.

“The way that we measure ourselves in terms of investment is, we try to analyze the fact that if DASH had not existed, how much capital would the City of LaGrange forfeited in for affordable housing?” Wolfe said. “We have accumulated and invested $9 million over here [in the Hillside community], but we have also invested $34 million in the rest of the City of LaGrange.”

Wolfe said that his goal is not to take business from local developers or property owners, but he said he does want to set a standard for what acceptable housing conditions look like.

“What I am competing against is an acceptance that it is OK for people to live in substandard housing, and that is still pervasive in this city in some pockets,” Wolfe said. “It is not an entitlement. If you look at our rental agreements with all the people we deal with, it is a contract that says if you live in this space, this is the cost and this is what we expect from you in terms of your behavior. Here is what you can expect from DASH, but if you don’t comply, you are out of here.”

According to Wolfe, Tucker Cottages requires half the calls of emergency services in other similar sized living areas. He also said the development has a waiting list for the single-family rental homes for adults 55 years and age and older. The cottages were completed in 2012.

According to Wolfe, all of DASH’s tax credit projects have been full before the projects are complete and never have vacancies. To learn more about DASH, visit Dashlagrange.org.