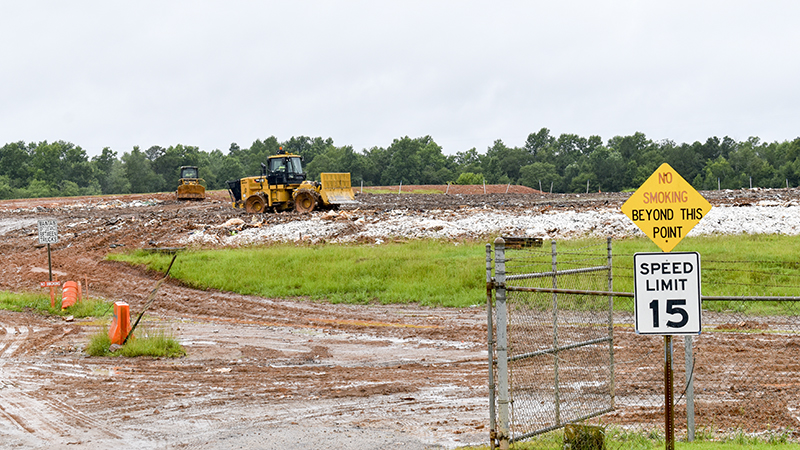 The Troup County Landfill is almost full, according to county officials, so the county plans to expand the current landfill to make more room. (Alicia B. Hill | Daily News)

The Troup County Board of Commissioners were talking about trash again on Thursday, with a proposed budget amendment that would make it possible for the county to expand its current landfill.

According to County Engineer James Emery, the landfill is almost full, but the county’s plans to expand the existing landfill to store a significantly larger amount of garbage is almost ready.

“The property has three sections — A, B and C — and two of those sections are full and closed,” Emery said. “The third section is getting close to being full now, and that section will be expanded horizontally and vertically to increase capacity by a large number.”

Emery said that the expansion could last for around 10 years. However, he also noted that events like damaging weather can dramatically alter how much material is taken to the landfill.

“There are years where the intake at the landfill has been double from one year to the next and then half the following year,” Emery said. “If you have a hail storm come through, and everyone in town needs to replace their roof, then that [construction and demolition] material would go to our landfill, and we could have a huge amount of increased volume.”

County employees have been working on facets of the expansion for some time, and they were glad that the process will be complete soon, though at a higher cost than originally anticipated.

“The good news is we are close to getting the landfill extension finished,” County Manager Tod Tentler said. “The bad news is it is going to cost us a little extra money to do so.”

Emery said the cost would likely be balanced by higher revenue that is anticipated following the expansion, however.

“It might be a wash in terms of this budget amendment,” Emery said. “We are expecting zero impact because of expected higher revenues coming forward in the next year, but this is a $95,000 budget amendment to handle one of the final, largest phases of the design and expansion at the landfill that we’ve been working on for a long time.”

The Georgia Environmental Protection Division approved the site for expansion earlier this year, which will make the project possible. Additionally, the county has already acquired property to be used for additional landfill space after the expanded section fills. However, that property has not yet been approved for that purpose by the Georgia Environmental Protection Division, according to Emery. He said that the county would begin the approval process on the new property following the expansion of the current landfill.

The Troup County Board of Commissioners plans to vote on the budget amendment during its regular meeting on Tuesday at 9 a.m. at 100 Ridley Avenue.

Voting to close the door