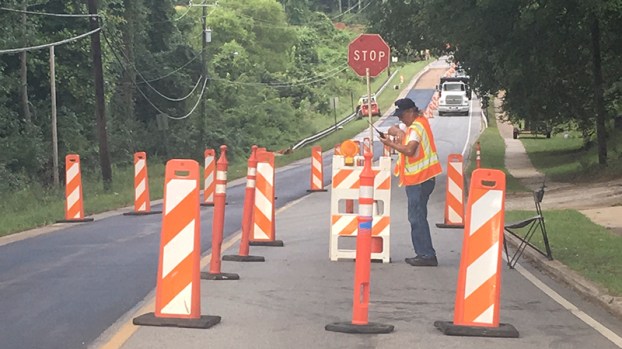 Metal plates and uneven roads on Country Club Road will soon be replaced by a freshly paved surface and the next segment of The Thread, according to information released by the City of LaGrange this week.

Some of the repairs to the road and the planned improvements were discussed during the LaGrange City Council meeting Tuesday and additional information was released Friday. According to a press release, letters will be mailed to area residents next week.

The repairs to the road were necessary due to settling following a sewer infrastructure project.

“The contractor that put the pipeline in really did not cut in the way they should have,” said Dion Senn, LaGrange public services director. “You’ll notice there in the detail that there is an overcut on each side of about 2-feet. … The contractor poured the asphalt and concrete there the same width as the ditch line, so what happened when the dirt settled was, the concrete settled along with the asphalt. That made a sink spot in the road.”

Officials admitted that the repairs have made for a bumpy ride recently, and they were eager to see the road repaired.

“If you haven’t been down Country Club Road lately, it is in bad shape because the road above the sewer line started to cave in, and the city has had to go in and basically redo the whole pavement,” LaGrange Mayor Jim Thornton said. “It is like a roller coaster in places.”

The city also plans to take advantage of the construction and repairs to update uneven curbs and make room for the segment of The Thread planned for the same part of the road where the repairs are taking place.

“Wherever we’ve had projects where the trail has touched, we try to factor the trail into those projects, so that we can get it all done at one time and not tear something up and then come back and tear it up again in the near future,” City Planner Leigh Threadgill said.

“We want to look at things holistically.”

The new segment will replace the bike lane on Country Club Road.

“We are going to be bumping it out 7 feet to 8 feet along there to provide enough width to accommodate a 10-foot trail section and hopefully a 5-foot landscape strip that will provide a buffer for the users,” Threadgill said. “That is really important. That is the standard detail that we have for what we call a side path. … The two bike lanes that are there now will go away, so those striped lanes are going to leave, and that is going to be the standard width that we have to work with. The goal was to not have to do a lot of [land] acquisition, especially now that this has jumped in priority. We need to be able to move.”

According to Threadgill, construction on this segment of The Thread will initially only extend to Pinetree Drive near Hollis Hand Elementary School, but there are plans to extend the trail past the school. The city was hesitant to lessen the road area near the school.

“When we come up to Pinetree, until we are hopefully able to obtain an easement, we may have to just stop the trail,” Threadgill said. “Bumping the curb out at this location has a significant impact on school traffic. … What people are doing right now is they are stacking in that right lane, so if I do what we are planning on doing for the rest of the roadway, that bike lane goes away, and we have a major problem.”

The city and the Troup County School System have been working together to ease traffic concerns on that section of road during construction on Country Club Road, and the school system has asked parents to take advantage of school buses.

“If parents would consider using a school bus to get kids in and out of there, it would probably help traffic congestion a great deal,” Assistant Superintendent John Radcliffe said. “Then we can get kids home probably more quickly.”

Radcliffe said that while most of the construction was cleared away from the front entrance to the school before school started, use of buses is still important due to construction on the already busy road.

Once construction is complete, the new segment of The Thread will connect to Broad Street at the roundabout, and the road itself will look very different.

According to Threadgill, the city did not receive the grant it applied for on the Country Club section of The Thread earlier this year, but the Panther Way segment did receive grant funding.

According to a city press release, once the project is completed, Country Club Road will be repaved and striped without bike lanes and a new header curb will be added and the new segment of The Thread will be built.

The contributions to the community of the late Anthony Jerome “Boss” Freeman were discussed by the LaGrange City Council on... read more