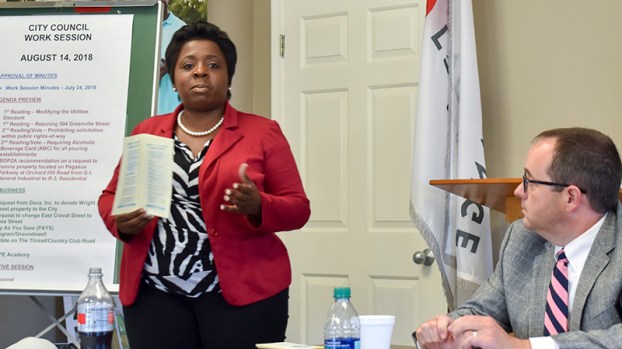 The LaGrange City Council heard about some of the plans for HOPE Academy and things the alternative school needs during a council work session on Tuesday.

HOPE Academy serves middle and high school students who cannot be in regular high school or middle school settings, generally due to behavior. According to the information presented at the meeting, one of the major goals at the school is to improve the transition for students at HOPE Academy to regular school and life.

“While we have them in school, I have noticed that none of them really have a plan, and that is normally prevalent when we are talking about at risk kids or people from poverty,” said Tiffany Pitts, a school counselor at the HOPE Academy. “They don’t have a plan because they live from crisis to crisis, so they are just trying to get by day by day. My goal is to make sure they have a plan prior to being transitioned back into their regular high schools.”

Pitts said HOPE is working with students to improve behavior, grades and attendance, but the most important change that she hopes to inspire is a new outlook on what students’ lives will look like after high school.

“Part of that plan is to try to change their way of thinking because if I can change their way of thinking the behavior will follow, so, they will be more productive citizens and better students once they do go back,” Pitts said. “In order to do that, I have to show them something different. We need to go on a college visit. We need to go walk through the Kia plant. I need to show them something other than what they see in their neighborhoods, so that they’ll have something to work toward.”

Pitts said that the school is also partnering with another program to help older students who have been in the program get General Education Diplomas. She emphasized the fact that the school needs the support of the council and the community.

“Funding that is given to other high schools in the area is not given to them, so we do need assistance, and these are the kids that I feel that we really need to pour into because they deserve a chance,” Pitts said. “They are the ones you may be reading about in the paper who may be pushing your crime rate up, so it is important that we invest in those kids while we can.”

According to Pitts, HOPE had 25 students as of Tuesday, and the maximum number of students the school is allowed to serve would be 90.

Council members asked several questions about how HOPE Academy works, but no action was taken by the council on Tuesday.

Other topics covered by the LaGrange City Council on Tuesday included:

Metal plates and uneven roads on Country Club Road will soon be replaced by a freshly paved surface and the... read more