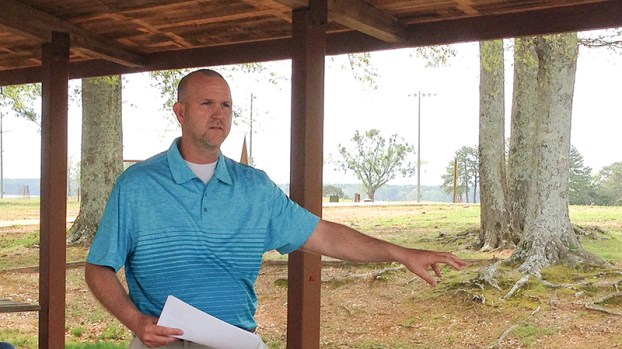 On Tuesday, the Troup County Board of Commissioners heard details of the grant process to receive funding for the Pyne Road Park project from the Land and Water Conservation Fund. The grant would build on the funds already allocated to the park under SPLOST.

“The Pyne Road Park project is currently funded under SPLOST for a funding mechanism,” said Cajen Rhodes, the director of Troup County Parks and Recreation. “We are looking at doing a multipurpose facility out at Pyne Road Park. We would like to do some campsite renovations, and we’ve even actually looked into options such as yurts out there at that site.”

Commissioner Lewis Davis asked if the grant funding could be used to upgrade the campsites, and Rhodes confirmed that the grant application is for the entire project at Pyne Road Park including the campsites and multipurpose facility.

“I’m excited about the Pyne Road Park upgrade, especially if we can utilize this grant money,” Davis said. “This is a big deal for the community.”

Rhodes said that he thought the county has a good chance of receiving some funds, though the county will not know if it received anything until next year.

“The land and water conservation fund grant cycle requires a 50 percent match,” Rhodes said. “We already have that 50 percent match through our SPLOST funding mechanism. The grant minimum is $25,000 with a maximum of $100,000, and what we have to proceed with is a pre-application.”

Typically, the county would have to put aside additional funding from the budget if it wanted to have the required matching funds available, so the fact that funding is already committed to the project and approved through SPLOST makes the decision easy for the commission.

“This is a great time to apply,” Assistant County Manager Eric Mosley said. “We have money at hand that we can use as match. We might as well take advantage of it and try to see if we can build upon it.”

The Troup County Board of Commissioners will vote on Tuesday whether to allow Parks and Recreation to proceed with the grant pre-application process. According to Rhodes, if the commission votes to allow the process to move forward, the county will learn if the pre-application was approved by March 2019 and the actual application will be submitted in April or May 2019.

Other major county projects included on the most recent SPLOST were the remodel and repurposing of existing buildings for the Troup County Fire Department headquarters and training facility, portions of The Thread, numerous road projects and upgrades to other local parks and recreation facilities.

Other topics covered in the meeting included:

On Tuesday, the LaGrange City Council voted 4-2 against a request from the LaGrange Housing Authority for a commitment of... read more