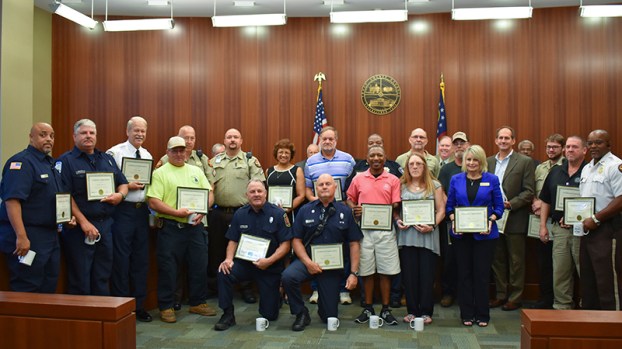 The Troup County Board of Commissioners and county staff check out one of the yurts in High Falls State Park. (Contributed)

They wanted to see the yurts.

On Thursday, the Troup County Board of Commissioners attended a retreat in at the Griffin-Spaulding County Chamber of Commerce and visited the park facilities at High Falls State Park.

During meetings earlier this year, commissioners have talked about the possibility of visiting a state park which uses modern camp sites that feature amenities popular with younger campers, like yurts, which were suggested by the Young Gamechangers in June 2017. Several commissioners said they wanted to visit yurts that are successfully in use elsewhere before installing any in Troup County. A yurt is a circular tent that is often placed on a platform at campsites.

“We wanted to go to High Falls State Park, so [Griffin] turned out to be the convenient place for us to get away for a while,” Commission Chairman Patrick Crews said. “It was from about 7 a.m. to about 4 in the afternoon, so we had a full day.”

During the annual retreat, the commission discussed a variety of topics and received updates on park projects, road projects, sanitation and the fire department. The visit to High Falls State Park was tied to one of the park projects under discussion.

“We are looking at how to improve our campsites at Pyne Road Park, and you remember when the Young Gamechangers came to LaGrange, they recommended yurts,” Crews said. “High Falls has some yurts, and we went over there to look at those. As we look to make improvements to Pyne Road Park, to the campground and build the multipurpose facility, we wanted to see what somebody else was doing in that regard.”

Crews said that if yurts are installed in Troup County, there will probably be only a handful at first, since it is currently unknown what the local response will be. Several other renovations are planned to make the campgrounds more inviting for younger campers, including upgraded electronic outlets, paving near camp sites and a multipurpose facility. The project is expected to be funded by the Special Purpose Local Option Sales Tax that Troup County voters approved in November 2017.

“There was some money in the SPLOST for Pyne Road Park to do some kind of event center and do some upgrades to the camp sites,” County Manager Tod Tentler said.

Troup County was initially estimated to receive $70 million from SPLOST in 2018, but according to a recent update, the county may have more money available to complete projects than it initially hoped for.

“Normally, what the county has done in previous years is we base our preliminary numbers [when budgeting] on 85 percent collection [from SPLOST], and as of last month, we are at 93 percent collection [for the year],” Assistant County Manager Eric Mosley said. “Obviously, we’ve still got half of September, October, November and December to collect.”

Those conservative estimates are designed to prevent the county from going over budget on projects. A project that costs more than SPLOST would cover would mean that the county would need to use money from the county’s general budget to complete the project. Conversely, extra funding provides a cushion to protect the county from unexpected expenses.

“We are seeing a trending growth pattern for the year,” Mosley said. “We tie a lot of that to businesses that have come to be in Troup County. Hobby Lobby is a great example of that. The mall redevelopment project is part of that. Obviously, Great Wolf Lodge is part of that as well, but I think we are seeing more people spend money in Troup County.”

The Troup County Board of Commissioners is scheduled to meet again on Sept. 27 at 9 a.m. at 100 Ridley Avenue.