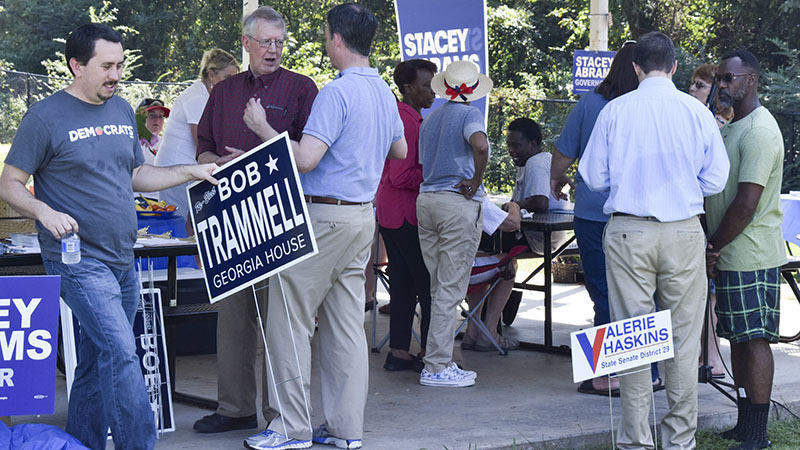 Candidates talk to people at Calumet Park on Saturday. The final day to register to vote in this election is Nov. 9. (Alicia B. Hill | Daily News)

On Nov. 6, Georgia voters will submit their ballots stating who they want to represent them at the state and national level.

Several Democratic candidates visited LaGrange on Saturday to talk to voters about their positions and encourage everyone to learn about the people running for office.

“[After talking to candidates] they’ll be an educated voter, an informed voter — so that when they go to the ballot, they will have a face to put with the name,” said Valerie Haskins, a candidate for state senate district 29. “They can have some information about the issues that are important.”

Haskins will debate Randy Robertson (R-Columbus) at LaGrange College on Tuesday at 11 a.m. in the Dickson Assembly Room at Turner Hall.

Candidates also said that meet and greet events are a great way to get to know what is important to the people they hope to represent.

“When we go to Congress, when we go to the state house, everything we do is going to affect everybody in these districts,” said Chuck Enderlin, a candidate for GA-3 U.S. Congress.

“The Georgia third spans 13 counties, and every vote I cast is going to affect you, whether you are a Republican or a Democrat, whether you vote, whether you don’t vote, and if you don’t know about the candidates, you can’t make your vote count. You can’t vote for the people who are going to help you the best.”

Enderlin is running against Drew Ferguson (R-West Point), and both have discussed the role of major manufacturers like Kia in the economic future of the state.

Talking to constituents is important both while running for office and once in office, according to candidates.

“[Events like this are a] great opportunity to meet candidates face to face and have an opportunity to talk about the issues that are important to the voters,” said Bob Trammell, a candidate for state house district 132 and current house minority leader.

“It is a great opportunity for us as candidates to have that dialogue. It informs our policy to the general assembly, and it is just a great chance to get together.”

To register to vote, access an absentee ballot or view a sample ballot, visit Mvp.sos.ga.gov/MVP/.