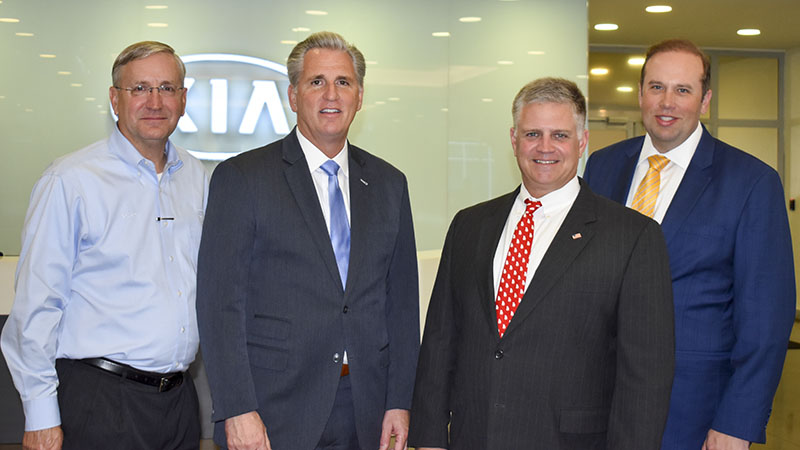 On Thursday, U.S. Congressman Drew Ferguson (R-Ga.) and U.S. House Majority Leader Kevin McCarthy (R-Calif.) toured Kia Motors Manufacturing Georgia and discussed some of the issues facing American automotive manufacturers. KMMG is the largest employer in Troup County and among the most notable employers in the state because of the jobs created by the plant’s suppliers.

“It is not that it is creating 2,700 jobs here,” McCarthy said. “It is creating thousands upon thousands of jobs for all the other manufacturing that is coming in to supply this location.”

For Ferguson, KMMG has been a sign of economic success in Georgia’s third district, the counties he represents.

“There is a sense of pride, but more importantly, there is a sense of joy to know that my fellow Georgians, and my friends here in West Point and the surrounding areas are growing their families. They are growing their incomes,” Ferguson said. “They have better opportunities than they have ever had. It is about seeing success. As you well know, after we saw the loss of the textile industry here and saw our community fall apart, and now [we] have the chance to see families succeeding again in living the American dream.”

Ferguson and McCarthy were able to tour the facility, and a group of KMMG officials joined the congressmen on the tour.

“We think that is fantastic that they want to come here,” said Stuart Countess, the chief administrative officer at KMMG. “Certainly, Congressman Ferguson is our great friend, and we appreciate his support, but today was a great opportunity to show [Majority] Leader McCarthy about, here is what we do in West Point, Georgia, and why it is so vital.”

During the visit, Countess also talked to the congressmen about the impact of recent steel tariffs on automotive manufacturers. Countess said that KMMG is currently analyzing updates to the tariffs and trade agreements to determine what the actual cost will be to KMMG. McCarthy said that he believed that the tariffs were a good move in the long run.

“When you talk about the long run, you want to make sure we have a supply in America that we can always be able to produce steel, when others were dumping it,” McCarthy said. “What we have found is we did have a challenge when it came to tariffs, but look what we’ve been able to do. We renegotiated a trade agreement with South Korea. We just renegotiated NAFTA. We’ve got works in place for the EU where they are lowering their tariffs, and now it is China, and we are focusing our attention there. So, for every time that someone was a little concerned about one element of it, we found that we came together, and we actually got a better agreement for the long term of America. I expect that to take place too with China.”

According to Ferguson, that ongoing conversation about manufacturing and employers was part of the reason for the visit on Thursday.

“This is a special visit talking about jobs here in America, jobs in Georgia, understanding the complexities of the automotive industry,” Ferguson said. “I felt like it was important for Kevin [McCarthy] to come down and see what we’ve been able to accomplish right here.”

Education and workforce initiatives like THINC College and Career Academy, which has received strong support from KMMG, was also discussed.

“Yes, it is a car company. Yes, it is assembling cars, but the commitment they made to education for the training of the children and the future and the generation that is coming through and the commitment there, but also what Georgia put into it,” McCarthy said. “It shows really a model that can work in other places as well.”

THINC Chief Executive Officer Dr. Kathy Carlisle testified before the U.S. Congressional Education and Workforce Committee in July on the success of the program asking Congress to pass a bill supporting career and education programs. The bill was signed by President Donald Trump days later. McCarthy said THINC is a model that will be considered when creating similar programs elsewhere.

“That combination and that structure that you’ve been able to do here with THINC — career, technical [is considered nationally],” McCarthy said. “We just passed that bill as well, and a lot of things that we do there is based around the future education, the future job training force and some of the things that you have done here [and] taking some of the very best practices, and applying it to those regions and communities that don’t have something like this [THINC College and Career Academy], but can in the future.”