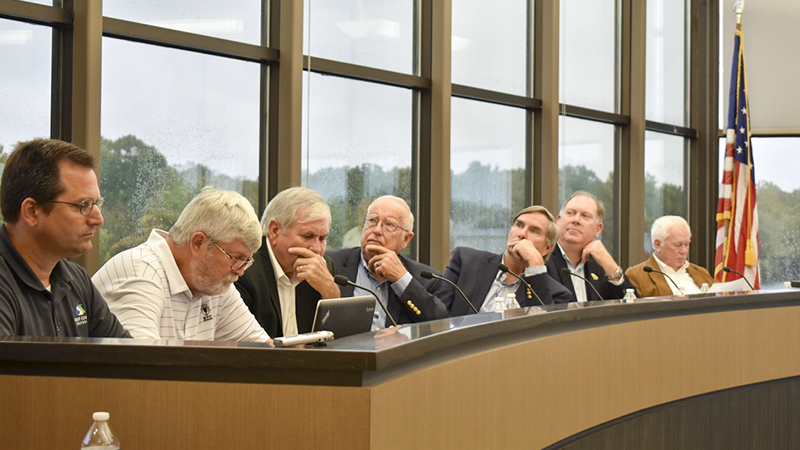 The Troup County Board of Commissioners reviews the county's sign ordinance on Thursday night in West Point. (Alicia B. Hill | Daily News)

WEST POINT – On Thursday night, the Troup County Board of Commissioners reviewed some of the concerns that they have heard since implementing a new sign ordinance in August 2017.

“This is something that we have been working on for quite a while here,” Assistant County Manager Eric Mosley said. “The commission voted in a new sign ordinance a little over a year ago, close to 14 months ago now, and over the course of the past few months, staff with both City of LaGrange and Troup County have been working in unison because now the city ordinance is almost parallel to ours. As you know, when you drive out into the county, there are areas where there are islands of the county in the city. West Point Road is a great example where one side of the road is the city, one side is the county, so it just made practical sence to the citizens for us to go out there together.”

Officials have been giving information on the new ordinance and a simplified ordinance to property owners, and many businesses have made the requested changes. However, county staff now want the commission’s direction on what to do with businesses with non-compliant signage.

“We still have some who have not done it, and those are where we are starting to get a few phone calls from those who have gotten compliant and have been good about it saying, ‘Hey, we complied. We did what you asked, and we actually think it is helping. It is looking better, but why isn’t this person or this person [complying]. Are they going to get a citation? Are they going to get sent in front of the judge and get told to do it?’” Senior Building Official Jay Anderson said.

According to Anderson, the reasons offered by those not yet in compliance tended to hinge on cost and long-term use of certain types of signage. He said that large businesses have been quick to comply, but smaller businesses have worried that decreased signage could also mean decreased visibility.

During discussions on the ordinance last year, the board of commissioners heard about how excess signage can actually decrease chances that potential customers will pay attention to any signage. However, now concerns are being raised by businesses who have used exclusively portable signs.

“The calls that I’ve received — and I’ve received several — were concerned about their business,” Commissioner Richard English said. “This one lady was saying, ‘If I take my sign down, folks will think I’m going out of business.’ We don’t want to ever do that. We don’t ever want to hurt small business.”

Davis asked for suggestions of affordable alternatives to portable signs for small business owners who have been using temporary signage to let customers know about their business. Anderson said he typically suggests better utilization of already available space and less expensive pole signs.

Commissioner Morris Jones asked that county staff be careful to apply the ordinance evenly to both those already in compliance and businesses with non-compliant signage.

Anderson noted that many of the non-compliant signs had been in place for decades and have been out of compliance for just as long and are only now being addressed to an increased focus on code enforcement.

Cadenhead asked if any additional allowances were made for schools and churches. Davis asked if nonprofits, like churches, could be made exempt from the permitting process for temporary signs. Anderson said that he would look into it. Commission Chairman Patrick Crews asked that he outline the process for putting up a temporary sign for any event.

“They come in and tell us exactly what they are doing … and they are allowed to have one for 30 days [every four months],” Anderson said. “If you are having a big Easter thing in the spring quarter, you can have 30 days, which is a pretty good time, 30 days before Easter. Then obviously on Fourth of July, you’ve got another one, and then a fall one. So, I mean 30 days once a quarter with Christmas at the end of the year — they do hit at the main [times when most groups need signs].”

Mosley said that the county had no desire to cite anyone, and the aim when enforcing the ordinance is to clean up corridors for the entire community. Anderson said that no citations had been written as of Thursday night.

The Troup County Board of Commissioners is scheduled to meet on Tuesday at 9 a.m. at 100 Ridley Avenue.