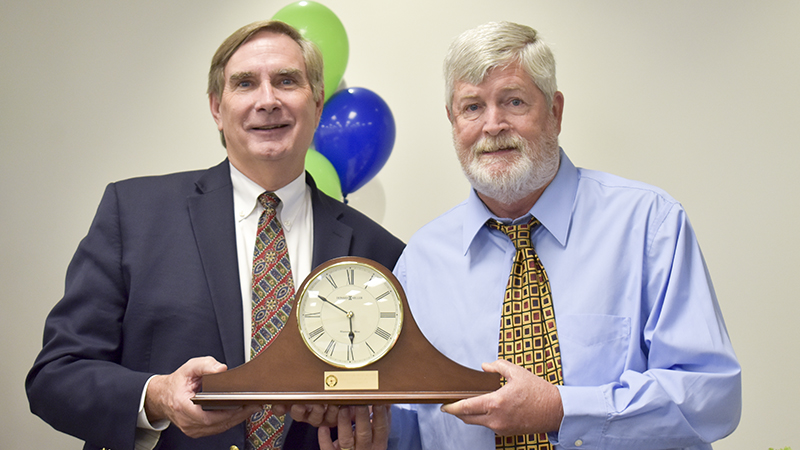 There were more than a few misty eyes at the Mike Daniel Recreation Center on Tuesday, when Troup County held a farewell reception for longtime county manager, Tod Tentler.

Tentler has worked for Troup County for 20 years, and in that time, he has served in different roles helping to shape the county, but he is best known though for his six years as county manager.

“He was an outstanding county manager,” former county commission chairman Ricky Wolfe said. “He was very level headed and was very good at staying out of the politics of things and just focusing on what is best for the county. I enjoyed very much working with him. I’m glad to say that I’m the one who got him promoted into this job. We’re going to miss him.”

Tentler was promoted to county manager in 2012. Prior to that, he was the director of Troup County Parks and Recreation then the assistant county manager. During Tentler’s tenure as county manager, the county experienced unprecedented growth, which Tentler attributes to the hard work of people within the county.

“I think the biggest accomplishment is all of the great things that we were able to do — from the amphitheater to Great Wolf to Sewon to Kia to our relationship with the cities that are all good and the great county employees that we have,” Tentler said. “I thank them for everything they have done with me over the last few years.”

People who worked with Tentler regularly said that his focus on the people was a defining characteristic of his management of the county.

“He was dedicated to [Troup County employees],” County Commission Chairman Patrick Crews said. “Always in his conversations with me, he was talking about the employees and what was good for them and what was right for them. It was always at the top of his mind, so for y’all that were employees here, he was always thinking of y’all and appreciated the work that you did.”

All of the members of the Troup County Board of Commissioners spoke on their time working with Tentler during Tuesday morning’ meeting, expressing their gratitude for his work for the county.

Tentler, who dressed as a retiree for Halloween, said that he plans to spend his retirement with family and recreation.

“I hope to be able to enjoy myself for a little while and do some traveling, play some golf, play some tennis, play some pickleball, visit the grandkids and hopefully I can do some volunteering and contribute to all the people who gave me so much over the years,” Tentler said.

County officials were not the only ones who wished to honor Tentler on his retirement though. Officials from throughout the county attended the reception and expressed their gratitude to Tentler. During the Troup County Board of Commissioners meeting, Georgia State Patrol Sgt. Maurice Raines appointed Tentler as an honorary Georgia State Trooper with GSP.

“From the time I met you in ’09 to building a new post to other things that I’ve asked for… Tod has really been an asset to me as a commander here as far as support,” Raines said.

Tentler was also recently honored for his contributions to local alternative courts.

“For those of you who don’t know, we gave Tod our star award in our DUI, Drug Court graduation the other night,” said Markette Baker, the Troup County solicitor-general. “We appreciate his support behind the scenes and locally for all of the alternative courts and the differences that have been made in all of the court system over the years.”

Tentler is expected to work with the county on various projects through the end of the year.