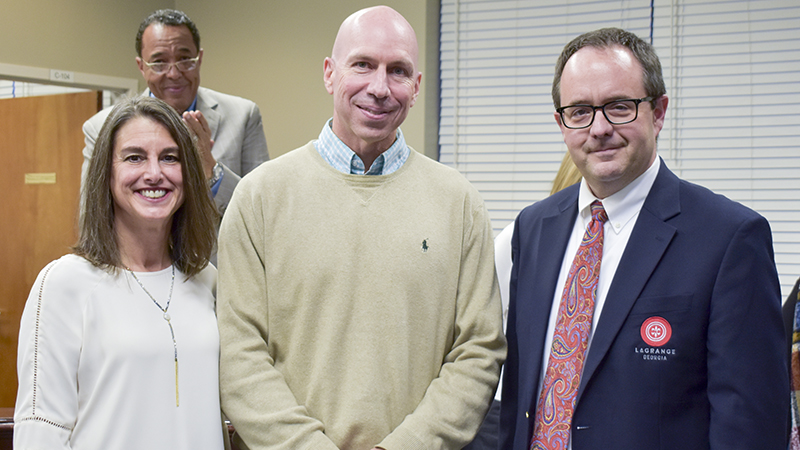 Patrick Bowie is recognized by the LaGrange City Council on Tuesday for 30 years of service. Pictured here are Lori and Patrick Bowie with Mayor Jim Thornton. (Alicia B. HIll | Daily News)

On Tuesday, the LaGrange City Council recognized LaGrange Utilities Director Patrick Bowie for 30 years of service to the city.

Bowie is over the operation of the city’s water, natural gas and electric utilities. He also oversees the City of LaGrange’s customer service, collection and utilities service center.

“Patrick came to work for the City of LaGrange in August of 1988 as the assistant director of Utilities,” Mayor Jim Thornton said. “In July of 1992, he was promoted to director of utilities and has held that position ever since.”

Under his leadership, LaGrange Utilities have remained significantly below the state average, and the improvements made to water systems under his leadership have been credited as one of the reasons the LaGrange Fire Department was able to achieve a lower ISO score.

“Patrick’s professional accomplishments are numerous,” Thornton said. “Early in his tenure as director of Utilities, he was instrumental in changing the City of LaGrange’s relationship with MEAG Power in a very positive way. That change has had benefits for LaGrange as well as MEAG Power. Patrick subsequently ran for the [MEAG] board and secured a seat and has been re-elected several times. He has also served as chairman of the board at MEAG.”

Thornton also reported low customer dissatisfaction with LaGrange Utilities under Bowie and credited him for his work with large business customers. Since the City of LaGrange does not charge a property tax, those accounts are especially important to maintaining city services in LaGrange. However, Bowie credited those he works with for improvements to city utilities.

“That was a list of accomplishments, but none of them could have been done without the teamwork that we have in the city,” Bowie said. “… The credit may go to one person or two people, but it is a whole team of people that are responsible. We are very fortunate to have had good superintendents through the years that run all of those divisions and do a fantastic job where the rubber really hits the road.”

Bowie’s supervisor, who shared a cubicle with him for years, City Manager Meg Kelsey said that she was happy to be able to work with Bowie.

“Patrick and Lori [Bowie] both have been dear friends of mine,” Kelsey said. “Patrick and I were colleagues for many years, and now I get the opportunity to be his boss, but I don’t think of it that way. We work very well together. He is a critical thinker and a very valuable member of our team. I don’t think we could do what we do without him.”

“Whenever we ask Patrick about something, he listens real closely to whatever our point is, and he always has the information that is needed to give you an answer,” Council Member Tom Gore said. “He gives fair consideration to any new ideas that come up, and I really appreciate that, and we have the confidence that whenever you settle on something and say, ‘This is what I think we need to do.’ We listen.”

Recently, Bowie has provided the LaGrange City Council with recommendations on utility meter upgrades, Plant Vogtle and Pay As You Save, a program that could decrease utility costs for some citizens.

“I’d like to say as one of the newest members [of the city council], your service is recognized throughout the state,” Council Member Nathan Gaskin said. “As I go to these meetings, I realize how lucky we are to have you here, and we look forward to you staying here another 10 years.”

Bowie said that he looks forward to continuing to work for the city.

“It is a great community,” Bowie said. “I never want to leave. I love working here, and now I have a grandson here too, so that is going to keep me here for a long time.”