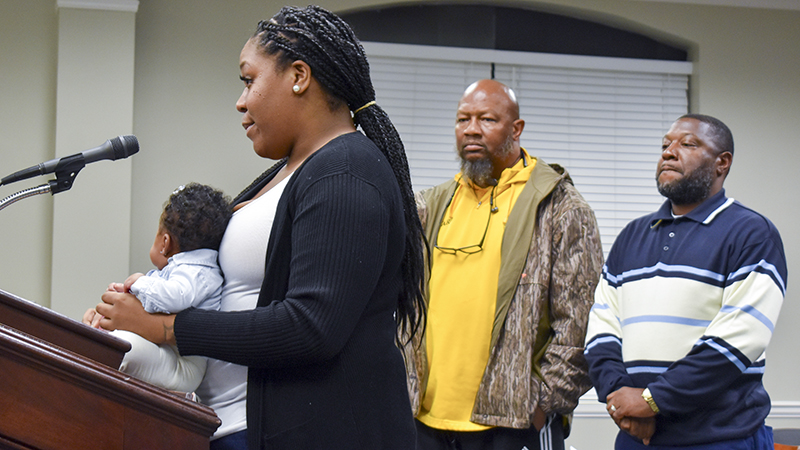 A former resident of Tall Pines Apartments addresses the LaGrange City Council regarding her concern for what she believes was mold in her apartment at Tall Pines while pregnant with her daughter, while Ernest Ward and Leon Childs look on. (Alicia B. Hill | Daily News)

On Tuesday, the LaGrange City Council unanimously moved to file a nuisance abatement against Tall Pines Apartments, hoping the possibility of court action might force management to improve living conditions.

During recent meetings, the council expressed a desire to give Tall Pines management the chance to fix reported problems, which range from exposed wiring to mildew. Community Development Director Alton West confirmed Tuesday that some issues have been addressed, but he said large problems still remain.

Multiple residents of the apartment complex spoke to the council on Tuesday night, relaying issues with mold, mildew, backed up sewage and crumbling ceilings along with their concern for the children growing up in the buildings. Tuesday was the first time that a group of residents brought their concerns before the council in an open meeting, and council members took the discussion seriously, noting apartment numbers, tenant names and concerns, which may soon form the basis of a municipal court case against the owners of Tall Pines.

“I have called the city to come out and do a walkthrough to see what was going on with the apartments,” said Latrice White, a resident of the Tall Pines Apartments. “I have also let the manager of the apartments know, and she stated that she was going to get things fixed, and it was going to be better. It never did [get better], so now we’ve got worms coming out of the walls, in the bathtub. I believe there is mold. We have mushrooms growing in the bathroom and the bedroom and only one commode per apartment.”

Other residents talked about mold, and one said that the ceiling had fallen in a room of her apartment. Management for Tall Pines Apartments could not be reached for this story and did not speak at Tuesday’s meeting, and has not spoken at any recent meeting. In an August story, The LaGrange Daily News spoke to manager Dionne Davis, who said she took over management of the apartments in July. At that time, Davis said she was committed to making improvements.

The City of LaGrange cannot force Tall Pines to make improvements, so the nuisance abatement would put the matter in the hands of the court.

“The city has no authority to go in and require any specific improvements,” Mayor Jim Thornton said. “All the city can do, and what Dr. Edmondson has proposed, is to declare Tall Pines a nuisance, which means everybody has to leave [if the court rules the complex is a nuisance]. That is the only thing that the city can do, but that would ratchet up the pressure on Tall Pines and management to potentially address [the problems to prevent that ruling].”

During the council meeting, it was estimated that the court process would take about six months, and West confirmed that the city has “enough documentation to build a case to present it before the municipal court.” However, council members did not sugarcoat the fact that the motion could result in hundreds of families without homes if Tall Pines management does not resolve concerns to the satisfaction of the court.

“At the end of the day, I want to make it clear that if Tall Pines did not respond to that nuisance abatement request, and the process went through, then the municipal court would declare Tall Pines a nuisance, and it would be uninhabited,” Thornton said. “So, everybody would have to move out at that point. That is not the intent of the motion.”

According to council members, the intent of the nuisance abatement is to ensure that efforts to improve healthy living conditions are undertaken in earnest.

However, there was some hesitancy from the council because of the possibility that it could result in local families not having anywhere to live in the near future.

“I’ve actually known about this problem at Tall Pines for more than 10 years,” said Council Member Nathan Gaskin, who took office in January. “I asked the council some weeks ago to reach out to our elected officials — our congressmen, our senators — to prepare for just this occasion, the fall out. I’ve made the analogy that this is like a train coming off the track real slow, and we know that a disaster is about to happen, but the question is when and where and how do we manage it?”

Gaskin said he worried that Tall Pines management would put residents out of their apartments instead of facing a court case and making repairs. He proposed that the city treat the situation like a natural disaster and solicit money from the United States Department of Housing and Urban Development and the Federal Emergency Management Agency to resolve concerns for possible homelessness resulting from the closure. It was stated in the meeting that Congressman Drew Ferguson, Senator David Perdue and HUD representatives were contacted regarding concerns at Tall Pines prior to Tuesday night.

“Congressman Ferguson has toured the Tall Pines Apartments at the request of residents and saw their condition firsthand,” said Amy Timmerman, Ferguson’s communications director, in a statement Wednesday. “The Congressman is encouraged by the local engagement to address this issue, and he and our staff are currently working with federal officials to figure out the best path forward for Tall Pines Apartments and their residents.”

Perdue’s office confirmed on Wednesday that he is aware of the situation and assisting at the federal level.

Thornton said DASH, HUD and the LaGrange Housing Authority were contacted regarding possible emergency housing prior to Tuesday night.

A call for comment from Ledic Realty Company LLC, the management company over Tall Pines Apartments, was not returned on Wednesday.