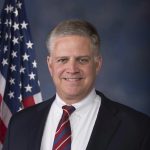 “I am honored that Drew Ferguson has accepted my offer to serve as my Chief Deputy Whip for the 116th Congress,” Scalise said in a press release. “Drew has proven himself to be a tireless worker and an invaluable member of my whip team this Congress, helping us secure the votes for major conservative victories like our tax cuts bill. Drew is respected and well liked and has built relationships across the entire spectrum of our Conference. He is a strong advocate for the conservative principles that House Republicans stand for and his fighting spirit will be a huge asset to us as we work to stop the radical, leftist agenda being promoted by House Democrats.”

Ferguson said that he was honored to take on the role.

“I am truly honored that Steve Scalise has asked me to serve as his Chief Deputy Whip,” Ferguson said. “Steve is more than a conservative leader, he is an inspiration for all Americans. I look forward to the challenges, responsibilities and opportunities ahead, and I am excited to help lead the GOP Conference in this new role.”

Ferguson was re-elected as the representative for Georgia’s third Congressional district in early November. He has served as a Congressman since 2017 and previously was the mayor of West Point.