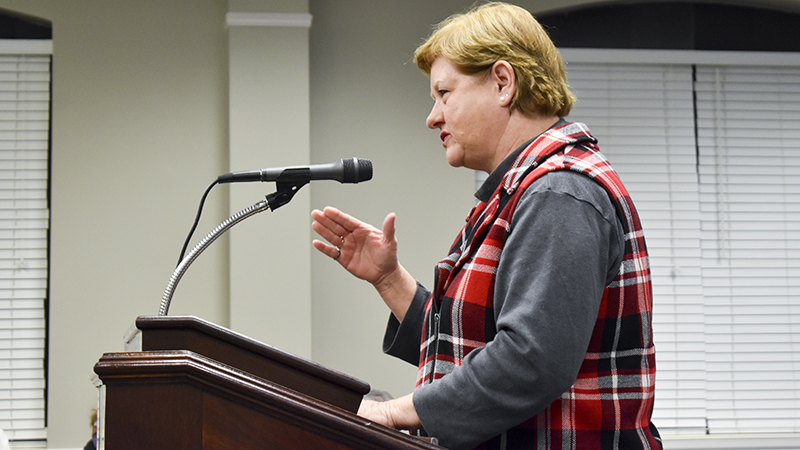 Friends of the Library President Mary Ann Keck approached the LaGrange City Council on Tuesday to request an exemption for a sign that regularly advertises community events. (Alicia B. Hill | Daily News)

On Tuesday, the Friends of the Library asked the LaGrange City Council to consider an exemption to the sign ordinance for a sign that is used year-round to advertise library events.

The request was discussed at length during the city council’s work session prior to the meeting, and at that time the council agreed that while the sign served a good purpose in the community, the city could not make an exemption for any one group.

The signage the library is currently using is considered temporary because it is not physically in the ground and can be easily moved from place to place. Under the ordinance, a temporary sign can be displayed for a 30-day period once a quarter, not year-round as it is currently being used.

“The mayor and council cannot discriminate between for profit and nonprofit organizations,” Mayor Jim Thornton said. “We cannot carve out exceptions for one particular organization. We can’t do anything that favors one type of speech over another type of speech, and that is really what you are talking about. Signs are considered speech. It is considered expression, and the ordinance has to be content neutral. So, it can’t favor any particular organization or not. We can’t carve out those types of exceptions. It is a land use restriction.”

The council listened carefully to the request at the meeting though.

“We understand that there is an ordinance, and we understand that there is a law,” said Mary Ann Keck, the president of Friends of the Library. “We are not asking that that be changed completely, but we feel like we need an exception. We are not a restaurant. We are not a business. We are a nonprofit organization. The Friends of the Library group is there to raise money to help with the children’s program. As a retired media specialist in elementary school, I know you want to get [children] reading early.”

Keck listed various community events that have taken place at the library, many of which were advertised on the sign. After Keck spoke, a solution was offered. However, that solution would require that either the Friends of the Library or First United Methodist Church of LaGrange, who owns the property where the sign is usually displayed, undergo the expense of erecting a permanent sign to advertise at that location and request a variance to make the permanent sign legal under the ordinance.

“The issue is what you have now is designated as a portable sign, and so a portable sign has that time limitation on it,” Thornton said. “It is not a permanent sign that could potentially be erected that would require a variance and would acquire some permanence.”

Thornton said that the council could not waive the $300 variance fee for any group or organization. Keck said that the group has permission from the church to have the sign at that location, and the sign is sometimes also used to advertise for FUMC. However, it was unclear on Tuesday how the church would feel about a permanent sign at that location.

Thornton is also a member of FUMC.

“[The Mega Book Sale raised] $1,800 that will go to programs that we can help finance [at the library],” Keck said. “So many people talked about, ‘We didn’t know about this. We don’t get the paper, but man, we saw your sign, and we had to come see.’ We even had four couples who had been at the campground and were on their way to Florida — I guess snowbirding — and they said, ‘Oh yeah, we were on our way to the interstate, and we saw your sign, and we said, ah, we’ve got to stop. We can get some books.’ [The sign] has just been such a success, and it has been so helpful for the friends group.”

Other topics covered during the meeting included: