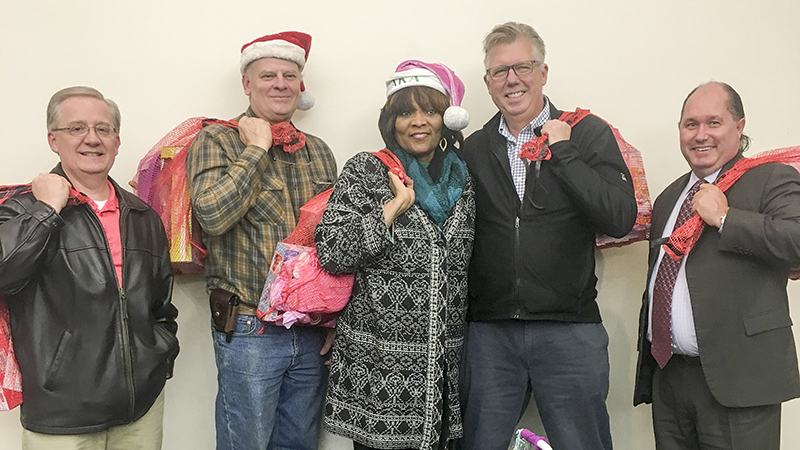 From left, West Point City Councilman Gerald Ledbetter, Mayor Steve Tramell, City Councilwoman Sandra Thornton, and City Councilmen Joseph Downs and Benjamin Wilcox pose for a photo following the Nov. 27 work session with gifts that have been donated by members of the city council to the community for the holidays. - Baker Ellis

During her presentation, Crane made note of the chamber’s new location, which recently changed.

“In case you all don’t know, the chamber of commerce has moved,” Crane said. “We are not located in what used to be the dentist’s office behind McDonald’s in Valley. As of yesterday we were operating in the new location. That doesn’t change our service area or who we support and promote, we just needed more space. We’re excited about what this year has in store.”

The only discussion held on the proposed budget came in the form of a comment from Councilwoman Sandra Thornton, who noted she wanted to see the city expand the youth services building.

The proposed budget for fiscal year 2019 assumes the city will generate approximately $19,500,000 in revenue between the general funds and enterprise funds. The general fund budget will be reduced by $1,010,938 from 2018, in large part due to a nearly $900,000 reduction in revenue from the Economic Development/Forward Fund, which feeds into the city’s general fund. This has been driven by the reduction in Payment in Lieu of Taxes from automotive companies, per City Manager Ed Moon in email correspondence. The city also plans to provide a two percent raise to all employees this upcoming budget year. The budget is scheduled to be finalized at the city council meeting on Dec. 10.

In other news, West Point Utility Director Sammy Inman also brought updated natural gas liaison manuals for each member of the council, as well as Mayor Steve Trammel, to sign.

“This is the same as it has always been,” Inman said. “We’re required by federal law to make sure the elected officials have this. It is just bits and pieces and parts of our manuals to show what our manuals are and responses to emergencies.”

The council voted to cancel the work session scheduled for Thursday, Dec. 6, as this is scheduled at the same date and time as the West Point Christmas parade. The council will meet on Monday, Dec. 10 for its next council meeting.

In from the cold: City council hears requests regarding…