Last week, Congressman Drew Ferguson was named the chief deputy whip for the 116th Congress, and on Thursday, Ferguson took time out of his schedule to discuss what that will mean for citizens of Georgia’s third district, which includes Troup County.

“My primary responsibility remains to represent the people of the third district of Georgia,” Ferguson said. “The uniqueness of this is that now I will be in a position of leadership in the house, where we get to elevate the views of this district, our state and this region to a much higher level. We’ll be able to fight for our district in a much different place. It also gives us a chance to help shape the conversation about where the party goes in the future and how we fight back against this push toward socialism that we see from the far left.” 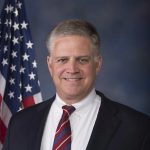 Different projects in the third district have already received congressional attention, including THINC College and Career Academy, whose Chief Executive Officer Dr. Kathy Carlisle testified before the U.S. Congressional Education and Workforce Committee in July, and Police Chief Lou Dekmar’s testimony regarding concealed-carry reciprocity gun laws in his role as the president of the International Association of Chiefs of Police. Ferguson said that he hopes to continue to promote programs like THINC that emphasize the school, workforce connection, among other issues that he believes are important to his constituents.

“We still have a number of high priorities in the next session,” Ferguson said. “Obviously, we have a broken immigration system that needs attention, and it doesn’t just need attention, it needs to be revamped. That is something that I hope that we find success on.”

Ferguson also cited the need to address issues like the country’s debt and deficit spending, which he blamed on programs like Medicare. Additionally, he said that it is important to financially support the men and women in the military, and he claimed that he would work across party lines when he believes that will benefit residents of Georgia’s third Congressional district.

“Just as we have in the past, in this past session, we will work hard to find those areas of agreement,” Ferguson said. “Sixty-eight percent of the bills that the president signed this year were in fact bi-partisan bills There are always opportunities for bipartisan success, but there are times also where I know the direction that Speaker [of the House Nancy] Pelosi and the Democratic House leadership are pushing for are places that do not represent the values and the ideas of the third district of Georgia.”

Other topics of concern that will likely be discussed in Congress during the upcoming year include Republican supported bank deregulation, reevaluating and renegotiating trade deals, improvements to public education and broadband internet access to rural areas.

A member of Ferguson’s staff will be in LaGrange on Thursday, Dec. 13 from 10 a.m. until noon to meet with constituents and assist any constituents experiencing a problem with a federal agency at the LaGrange-Troup County Chamber of Commerce.