Developing a plan for the future of LaGrange 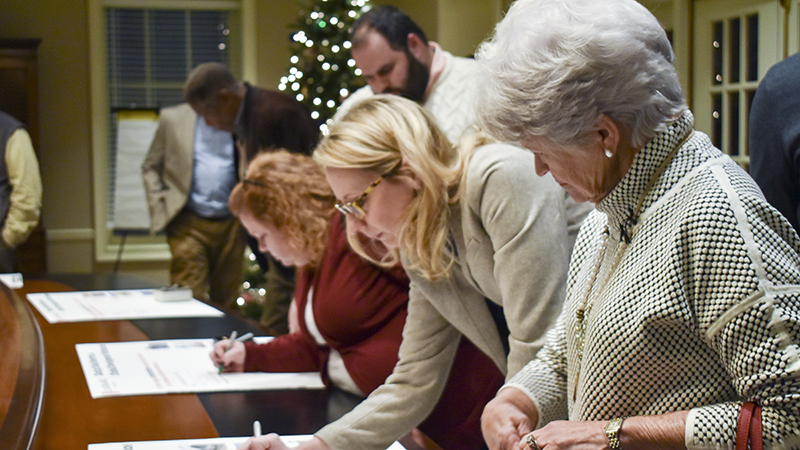 On Thursday night, the City of LaGrange sought public input on a major zoning rewrite, which city leaders say will impact development in the city for decades to come.

“We really want to get a sense of what kind of community you want to have here in the future because this development ordinance is going to shape your community for the next several generations,” Aaron Fortner, a principal and founder of the Canvas Planning Group, which is consulting on the project. “It is going to have some sort of design component to it, so it will say not only where you can build things, but what those things look like. It will also get into the kinds of things like if we are building new subdivisions that have new streets, what do those streets look like? What do we want the streets of our community to be like? This document that we will get done in the next several months will really shape your community for the next several generations.”

The current ordinance has been in place for decades and has already shaped the community in many ways.

“Our current zoning code dates from the late 60s, which is when the current code was adopted and has been tweaked periodically over the last 50 years or so,” LaGrange Mayor Jim Thornton said. “So, the council felt like it was time to take a holistic view of our zoning and development practices to see how this hodgepodge of zoning ordinance that has developed over 70, 80 years looks in comparison to what we would call best practices around Georgia and really around the country.”

Thornton quickly walked the crowd through LaGrange’s zoning code history, which began with its first code in 1930. He said that LaGrange was one of only 14 cities allowed to have a zoning code at that time. Since then, it has received updates big and small, and it now includes old zoning districts that Fortner said no longer make sense to modern eyes and only serve to complicate understanding of what can and cannot be done at certain locations.

“The more simple your code can get, the better,” Fortner said. “It is easier to administer. It is easier for a builder to understand it. It is easier for you as a citizen to look into the zoning ordinance and understand for yourself without having to call somebody at the city or hiring an attorney for you to know what in the world are your rights. What does the development code do for you? Simplifying the code is important to do that, and we can do that with a lot of these old zoning districts.”

Some of the updates will make sure that those updates match other parts of the code, while others will resolve common citizen concerns.

“We have been working on this for several months now,” City Planner Leigh Threadgill said. “We do have a citizen steering committee that has been involved and working with staff, planning board members and the consultant to start to look at the ordinance and dissect it and think about where we go from here.”

However, those who spoke on Thursday emphasized that the process needed community input.

“We as the consultants are ready to start drafting the new ordinance, but right before we do that, this is the chance to make sure that we are hearing from the public,” Fortner said. “We also have a website that will be a great resource for you staying up to date with this project as it goes along, and we’ll also be taking the presentation [form Thursday night’s meeting] and putting it on the project website.”

Thornton said that an update to the zoning ordinance is also necessary to make sure that development coming to LaGrange is positive and sustainable long-term.

“This is all in anticipation of what many of us see around us, which is growth, because the City of LaGrange is very clearly in a growth mode,” Thornton said.

“Our population is increasing for the first time in decades. We are seeing annual increases population. You are seeing residential growth, but you are also seeing a lot of commercial and industrial growth. The mayor and council want to make sure that we are anticipating that growth, and we are doing everything that we can to encourage it, but also to make sure that it is good, quality growth, that it is sustainable growth, that it is the kind of growth that will make your children and grandchildren and great grandchildren proud to know that their community developed and prospered in a very holistic and sustainable way.”

Canvas Planning Group has previously done work in West Point, Hogansville and a variety of locations in the Atlanta area. To learn more about the rewrite of LaGrange’s zoning code, or to watch the presentation and offer your input, visit Zoninglagrange.com.