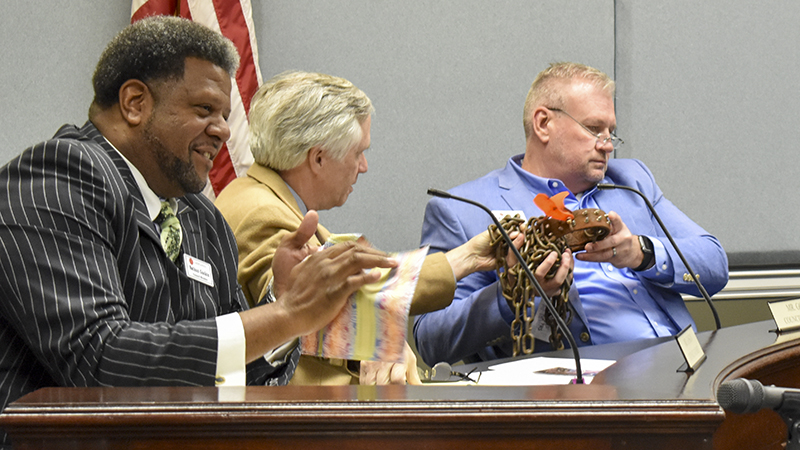 On Tuesday night, the LaGrange City Council held its first reading on changes to its tethering ordinance that would ban chains on trolley systems and padlocks for attaching dogs to tethers and establish shelter requirements for tethered dogs.

The changes are being considered after Evie Kettler, the founder of Paws4Chainge and local animal rights advocate, made a series of requests during a November council meeting. City staff, as well as representatives from the LaGrange Police Department and animal control, reviewed the concerns brought forward and recommended that the LaGrange City Council adopt several of the requested changes to the city ordinance.

“She wanted us to put shelter requirements for summer and winter months for safe and comfortable tethering for use with trolleys, so she gave us copies of DeKalb and Gwinnett shelter requirements,” City Manager Meg Kelsey said. “We went through that, and we do feel like those are reasonable. Those two are very similar, almost like they copied and pasted each other, so we put that into our ordinance [update], which basically provides for a four-sided shelter with adequate material in the bottom of it for temperatures that drop below 32 [degrees Fahrenheit], also a heavy flap door that would cover over during those low temperatures for animals.”

Kelsey said staff, including animal services employees, also recommended banning chains on trolley systems and changing the allowable tethering weight from 25 percent to 5 percent of a dog’s body weight.  That would mean that for a 40-pound dog, the maximum weight of the restraint attaching a dog to a trolley line would change from 10 pounds to 4 pounds.

The City of LaGrange banned single point tethering in December 2015, thus according to the city ordinance, dogs must either be on a trolley line or in a fenced area if they are left alone outside. Kelsey said that 20 to 25 people have been cited per year for not following the ordinance. She also said that she did not believe the change would create an unreasonable financial burden for citizens.

“They looked around at pricing for a tethering system for a small to medium sized dog [costs] $35 to go out and buy a tethering system that has a wire type structure that is covered,” Kelsey said. “So, it is very affordable for families if they need to tether their dog and don’t have a fencing system to do that.”

Kelsey also added the recommendation that padlocks not be used to attach dogs to tethers.

“In a lot of these pictures, I noticed that the animals have locks around their necks, and we did include that they should not be padlocked,” Kelsey said. “I just think that is inhumane to put a lock on a dog.”

Council Member Jim Arrington asked if the locks were being attached to prevent thefts, and Council Member Nathan Gaskin noted the cost of certain dog breeds. However, Mayor Jim Thornton noted that if chains are not allowed then there would likely be nothing for a padlock to attach to anyway and questioned if padlocks used to secure tethers would create an additional hurdle for animal control officers during animal abuse cases.

Some of the other requested changes to the ordinance will not be made, including a request to ban chains as leashes while walking dogs and a request to raise fines. The current maximum fine is $500, and the fine amount is left to the discretion of a municipal court judge. Gaskin questioned the fine amount in comparison to fines for human dwellings during the council work session.

“My problem is, I don’t think any human dwelling fine should be lower or greater than any animal fine for their dwelling,” Gaskin said. “If we value the dog more than we value the human, there is going to be a backlash. I guarantee it.”

The council ultimately agreed to leave the matter in the hands of local judges.

Kettler had also requested additional enforcement of the ordinance, but Kelsey and Thornton both said that due to the number of staff members over enforcing tethering, citations will likely remain primarily complaint based.

Kelsey said that education efforts on the tethering ordinance that were also requested would take place after the updates to the ordinance are voted on. Education on the ordinance will likely come in the form of inserts into utility bills or through social media.