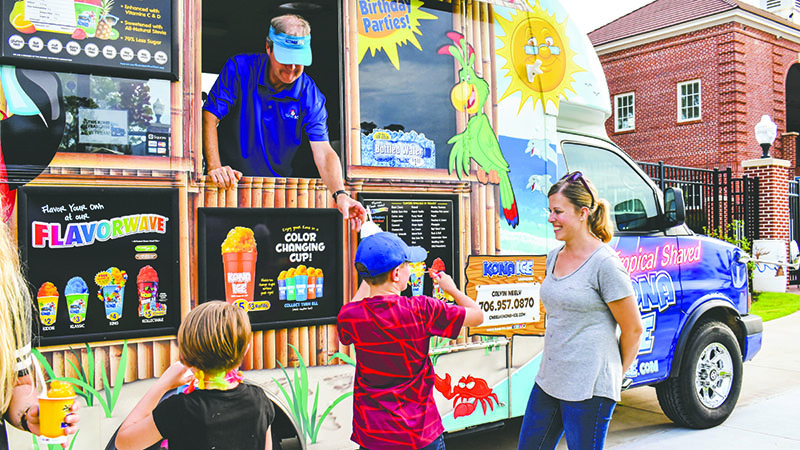 On Tuesday night, the LaGrange City Council held a first reading to amend the regulations that regulate food trucks in the city.

If approved, the updated ordinance would give the Downtown LaGrange Development Authority the power to allow food trucks to take part in DLDA events at the same locations more often than is allowed under the current ordinance. The planning board recommended approval of the update. The council also added the Troup County Parks and Recreation Department to the ordinance as an approving party at local park locations.

“There are several locations downtown that are already using food trucks, and the change of the code is essentially to sanction food trucks at those locations,” City Planner Leigh Threadgill said. “We are going to be revamping the whole ordinance, and we are in the process of doing that now. I am sure that we are going to be addressing food trucks in a much more holistic manner through that ordinance change. … This is a patch to make things consistent with practice.”

The possibility of giving the Troup County Parks and Recreation Department similar power stemmed from requests from vendors to be allowed at certain local parks and fields.

“A lot of people want to extend it to the parks as well as the stadium,” Council Member Nathan Gaskin said. “I’m not sure where the stadium falls into that, but there are ice cream trucks that want access to public events, and they are looking for that to change in their favor.”

Gaskin’s suggestion was included in the amended ordinance that was read on Tuesday.

“That would thereby take care of Granger Park, Callaway Stadium, etc.,” Mayor Jim Thornton said during the work session. “Then we would just leave it to the parks and recreation board to police it, kind of the way we are looking to DLDA to police. They would then be able to have regulations, rules, cleanup and all of those things.”

Gaskin also asked if farmers’ market style vendors that sometimes make use of local parks could receive an update with the amendment for transient merchants. Threadgill said that that style of vendors is covered under a different section of the city’s ordinance but said that it would be reviewed.