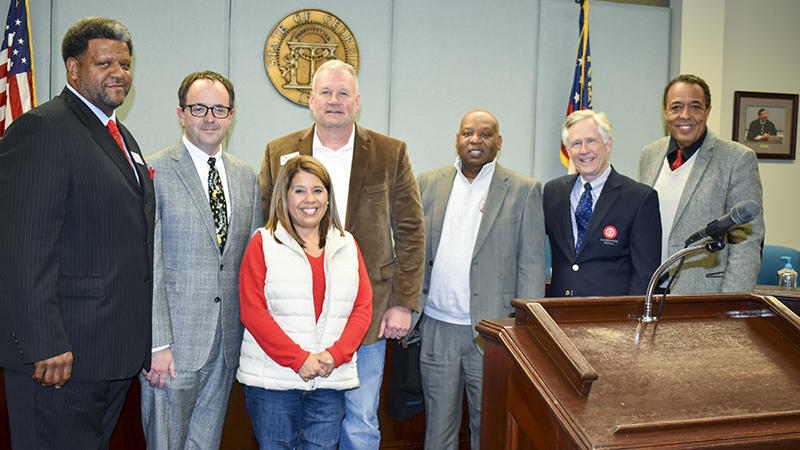 On Tuesday, the LaGrange City Council unanimously approved changes to its tethering ordinance.

The update to the ordinance bans chains for use on trolley systems and padlocks as a means of attaching dogs to tethers, reduces the allowable weight of tethers from 25 percent of an animal’s body weight to 5 percent and requires adequate shelter for animals.

The updated ordinance builds on changes that the LaGrange City Council passed in December 2015 banning direct point chaining, or tethering. The 2005 ordinance also outlined the required space allowance for a proper enclosure for a dog. However, when Paws4Chainge founder Evie Ketler realized that chains were still being used to attach dogs to trolley systems and that the ordinance did not list any requirements for shelter during extreme temperatures, she brought those concerns before the council. Paws4Chainge builds fences to help dog owners meet the city’s requirements.

“I am glad that [Ketler] brought this to our attention and working with the staff was very successful,” LaGrange Mayor Jim Thornton said. “This came to us as a recommendation from the staff.”

City Manager Meg Kelsey said that the update had been approved by the LaGrange Police Department and Animal Services, and the update will take effect immediately.

“The biggest bulk of that was to prohibit chains on the trolley system and also reduce the weight requirement from 25 percent to 5 percent [of a dog’s body weight],” Kelsey said during the council work session. “We also included language in there that the dogs would not be padlocked. … The other part of that was to provide shelter for the animal, especially when the temperatures go below 32 degrees.”

Kelsey noted during the Dec. 11 meeting that cable lines for trolley systems can be purchased inexpensively and would easily meet the weight requirement. The biggest change will be to the shelter requirements during times when temperatures fall below 32 degrees.

“There is a requirement in there for hay and pine straw that needs to be in there also and a flap that would be able to cover when we have extreme weather temperatures,” Kelsey said. “That was a citizen request, and they did ask for some other things that are not in the ordinance, but we did sit down with her and talk about what our recommendations were. Animal services were a part of this ordinance amendment.”

Part of the request not included in the update included increased fines for offenders, which the council agreed to leave in the hands of the court system.

“I’m very thankful. I think that it is wonderful,” Ketler said of the vote. “It is huge for LaGrange.”

Other items covered during the meeting include:

4The council unanimously approved an amendment to the transient merchant and zoning ordinance, which allows food trucks to be exempt from the ordinance’s duration requirements for events put on by the Downtown LaGrange Development Authority and Troup County Parks and Recreation when the trucks are approved by the respective groups. City Planner Leigh Threadgill previously noted that section of the ordinance may receive further revisions under the re-write, which is currently in progress.

4The council approved a request to de-annex a property on Upper Big Springs Road from the city to the county. It was stated in a previous meeting that the owner wished to combine the property with other land that is in the county.

4Max Kirby, Congressman Drew Ferguson’s local field representative, introduced himself to the city council and encouraged any constituents who need help with a federal agency to speak to him at Ferguson’s Newnan office at 1601 East Highway 34 or by phone at (770) 683-2033. Kirby, a lifelong LaGrange resident, said that his job is to represent Ferguson within the district and help field concerns from local politicians, businesses and constituents in the third district, so that solutions can be found.

4The council voted to fill the unexpired term of Speer Burdette on the Downtown LaGrange Development Authority with Tripp Penn. Burdette is retiring from his position as the president and general manager of the Callaway Foundation at the end of the year, and Penn is set to take on that leadership role in January.