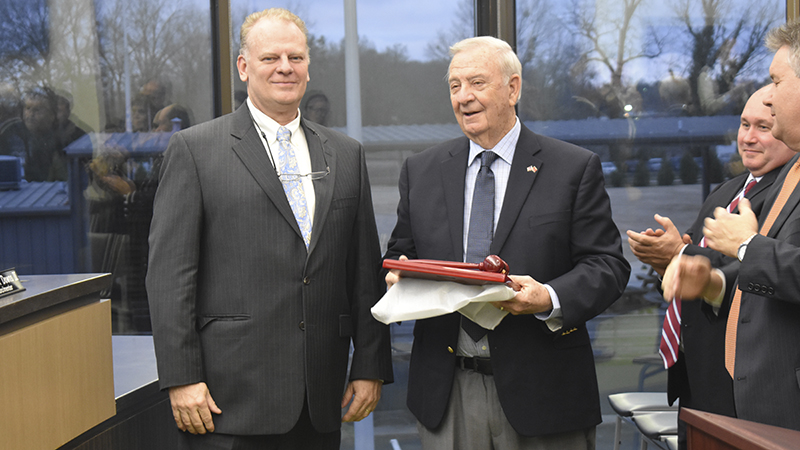 WEST POINT – The first West Point City Council meeting of 2019 was a flurry of activity, as the city council voted in a host of new positions and saw Councilman Benjamin Wilcox accept the position of West Point municipal court assistant judge and subsequently resign his position on the council.

The council also recognized Judge Kenneth Rearden for 20 years of service as the municipal court judge pro-tem, and witnessed the swearing in of new West Point police officer William O’Steen.

Wilcox was toward the end of his second term on the council, as his seat is up for re-election in 2019. He made the decision to take on the position of municipal court assistant judge because of his profession as a lawyer and because he was asked to do so by the outgoing Judge Rearden, thus the transition seemed an easy one for him to make.

“This seemed like the natural progression for me,” Wilcox said, who also said he will have fond memories of serving on the council and that the position takes time to become familiar with. “For a city council, I think anyone sitting here will tell you, your first term you’re just learning. It really takes into your first term before you’re knowledgeable to do anything. Your second term is when you have your sea legs under you before you get comfortable.”

Per Mayor Steve Tramell, the council will make a decision in the coming month on what to do in relation to the open city council position, which is up for election later this year.

In the meeting, the city council also made a number of county board and committee appointments as well.

In other news, the city council took the following action

4The council established qualifying fees for the 2019 municipal elections, setting the qualifying fee for the position of mayor at $153 and $90 for the open city council positions.

The fees reflected three percent of the gross salary earned for those respective positions in 2018.

4Granted 0.029 acres of city property to the Georgia Department of Transportation for the purposes of building a roundabout project near Exit 2 on I-85 and the intersection of U.S. 18 and 103.