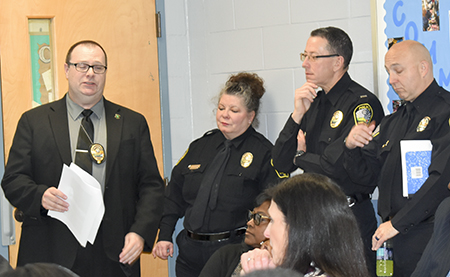 The LaGrange City Council met with the LaGrange Police Department and local outreach leaders on Tuesday to discuss recent crime trends and the police department’s responses to those trends.

The meeting was discussed earlier in the month, and just happened to take place on the same day as what is believed to be the first homicide of the year in the city.

“Public safety is our foremost responsibility as the mayor and council,” Mayor Jim Thornton said. “We are constantly working with the police and the fire and all the other various agencies of the city to try to see how we can improve things.”

Thornton specifically referenced the incident and asked the gathered community leaders to help the city find solutions to violence in the community.

“It is not enough to say we are making progress, and we are seeing some improvement,” Thornton said. “There are still issues out there in the community. We know that it is unacceptable, as what happened [Monday] night when we have somebody found dead in a car over on the north side of LaGrange near Walmart.”

Despite the stark reminder that there is always more work to do for the police department and the city, information shared during the meeting showed fewer instances of part one crimes, which include violent crime and property crime, during recent years.

“I think the takeaway that drives us, and in no small part the collaboration that we have, is the population over 20 years has increased 20 percent, while our property crimes have dropped 30 percent, and our violent crimes have dropped between 40 and 50 percent depending upon what year you select to compare,” LPD Chief Lou Dekmar said. “That isn’t just because of the police.”

Dekmar credited groups like the Community Outreach Group, which also took part in the meeting, with the decrease.

According to information released in the meeting, the decrease was also evident in recent years.

“Overall we are down on part one crimes, even though we had a slight increase in violent crime last year,” Strickland said. “From 2015 to 2018 — in 2016 you had a little bit higher number of crimes than we had throughout the other years — but you are down to 140, even though there is a slight increase over the past year. You can see again the trend in that same period for property crimes as continuing to decline over that period.”

Strickland also discussed gun crime in the city, which he said has also been on the decline. In 2015, 19 people were shot in LaGrange, and two people died from gunshot wounds. In 2018, 13 people were shot in the city, and four people died from gunshot wounds. He also said that the number of calls for shots fired has dropped consistently, from 383 in 2015 to 303 in 2018.

According to information from LPD, 107 guns were recovered in 2018 alone. According to Dekmar, those guns were confiscated as a result of detailed search warrants and follow up investigations.

“From 2014 to 2018, the number of homicide motives is highest as it relates to gangs [with seven homicides],” Strickland said. “We’ve had two related to robberies. One dispute or fight, two drug related and three that were domestic related.”

According to Strickland, the LPD conducted 32 violent crime special details in 2018, with the majority of those during the summer when there were several reports of shooting around Troup Street. Strickland said that in cases where the LPD identifies crime trends in an area, it puts together officer details who utilize a combination of marked and unmarked vehicles as well as community outreach to minimize or prevent the trend from continuing in that area.

Thornton noted some of the measures that the city council has taken over the years to support crime prevention initiatives and put a stop to existing crime in the community.

“Over the course of the last five years, the mayor and council have had conversations on numerous occasions about gang violence, about crime, about youth violence, and we have done a number of things in response to that,” Thornton said. “The mayor and council have worked closely with the police department and with other agencies — the district attorney, the sheriff’s department, etc. — to address these issues. Internally, we have added a number of new police officers to the force. We have invested substantially in technology, cameras and other forms of social media technology. We have partially funded a position with the district attorney’s office to address some of these issues.”

The other part of the funding for the position in the district attorney’s office comes from Troup County.

“We don’t want to be losing children and adults in our community to violent crime,” Thornton said.

The LPD plans to release its annual report with a detailed breakdown of crime and prevention in coming weeks.