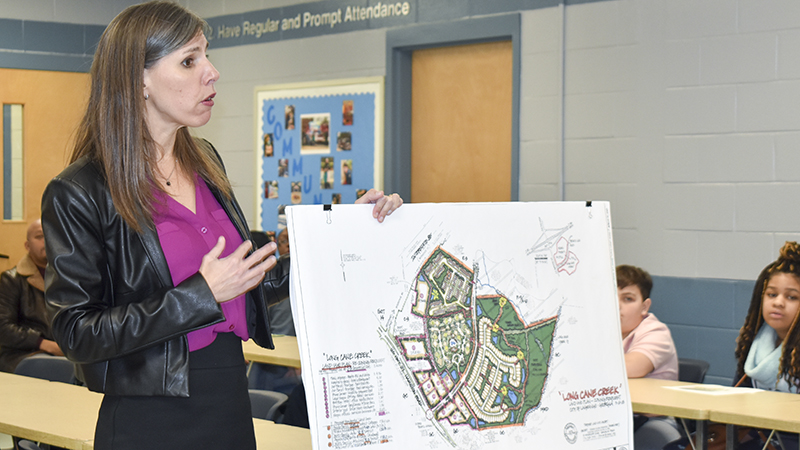 “One hundred-thirty-four acres of commercial is a lot of commercial, and the owner has gone through a market study that indicated to them that they didn’t think they had 134 acres of commercial to develop, but they did see quite a demand for housing,” City Planner Leigh Threadgill said. “We’ve all heard this. We’ve talked about the importance of adding to our housing stock, so they wanted to reduce the amount of commercial in this area and add some residential.”

The application requested that 21.29 acres of the property along Hamilton Road remain commercial, while the remaining property would be zoned residential and high density residential. According to Threadgill, the proposed plans for the property match the requirements for the adjacent Bryant Lake property and included a buffer area that was significantly larger than the city requires.

“You can see [on the plan] all the green around the subdivision. That is a huge buffer [between the proposed development and Bryant Lake].”

According to Threadgill, the buffer on the plan includes a flood plain and an existing natural barrier.

“The issue for the citizens is there is an existing development agreement on Bryant Lake that had a cap on the amount of residential,” Threadgill said.

“That cap [of 974 units] was obviously not for these 134 acres because they thought that was all going to be commercial.”

Under the 2006 agreement, 362 of those units could be multi-family units. If the rezoning is approved as requested, the total number of housing units accessing the development through Bryant Lake Boulevard would rise from 974 to 1,502, according to the application. The development, under the name Long Cane Creek, would be considered a separate development from Bryant Lake.

While little about the proposal itself changed, information released in the meeting indicated that several council concerns may have received consideration.

According to information released during the work session, the developer has indicated that the property will be developed soon after the rezoning.

Several council members have expressed concerns regarding speculative rezonings in previous meetings. Additionally, some of the public safety concerns appear to have received additional consideration.

“One of the changes in the planning board analysis was the potential for public use of what they are calling a private, commercial service road,” Threadgill said. “That was intended for any kind of emergency situation that might arise in Bryant Lake. One of the big concerns has been all about that single access point.”

Threadgill said the applicant will likely request that the Georgia Department of Transportation install a traffic light at the Hamilton Road, Bryant Lake Boulevard intersection, but that request would need to follow the rezoning. According to Threadgill, a traffic analysis showed that the rezoning would result in less traffic than the originally proposed development, but it could cause the area to have different peak traffic hours than the original plan.

“I just think it is a good development to me personally because we need those homes,” Council Member Willie Edmondson said. “I think it will increase not only that area, but it will also help our school system to come up to where it needs to be.”

Edmondson said that people are already choosing to move to Auburn, Opelika and Newnan instead of LaGrange because of a lack of available housing in the city. The City of LaGrange is currently taking part in a housing survey to identify exactly what its housing needs are, and the results of that survey are expected to be available in March.

The city council has heard on several occasions that certain types of housing will be necessary to accommodate growth — including approximately 2,000 additional jobs in the next two years — and the survey is expected to show the extent of those needs.

“We know that our apartments are almost entirely occupied,” Threadgill said. “There is not a lot of product that is necessarily on the ground currently that is able to absorb that kind of job growth and the population that could move in. We want to capture those people if we can. This owner sees that.”

While the property is in the city, it would not receive City of LaGrange electricity, but it would receive gas and water from the city and be connected to city sewer lines.

City Manager Meg Kelsey confirmed that upgrades to the sewer system have already been performed and no further upgrades would be necessary for the project.

The board of planning and zoning approved the rezoning on both occasions, but the city council’s approval is necessary for the rezoning to take place. The public hearing on the rezoning will take place on Feb. 12. Other items discussed by the LaGrange City Council on Tuesday include:

The city council voted unanimously to approve updated airport zoning, which will take into account the runway extension.

The city council voted unanimously to approve amendments to the employee retirement plan. According to City Manager Meg Kelsey, the update will not result in any notable changes, but it will bring the plan into IRS compliance.

The council greeted students from Communities in Schools, who attended the council work session.