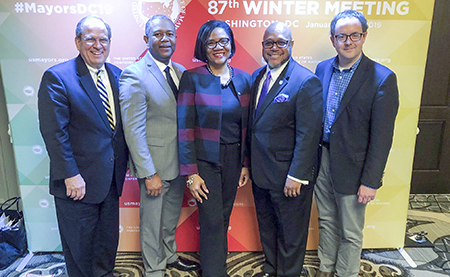 LaGrange Mayor Jim Thornton is among 250 mayors who participated in this year’s U.S. Conference of Mayors in Washington, D.C. this week.

The United States Conference of Mayors is a non-partisan organization bringing together mayors from cities with populations of 30,000 residents or more. The four-day event aims to strengthen local and federal ties. Speakers for this year’s event included cabinet secretaries, members of Congress, corporate CEOs, and mayors from across the country.

“The conference is a great opportunity to compare notes with over 250 mayors from across the country representing small and large cities alike. It’s good to hear from other mayors about their success stories as well as to learn from their failures,” Thornton said. “Takeaways from the event include the realization that our issues in LaGrange are incredibly similar to cities of all sizes all over the country, and that local mayors are actually trying to solve real-life problems in their communities without getting bogged down in partisan politics. I always come away from conferences like this inspired about the great possibilities for LaGrange.”