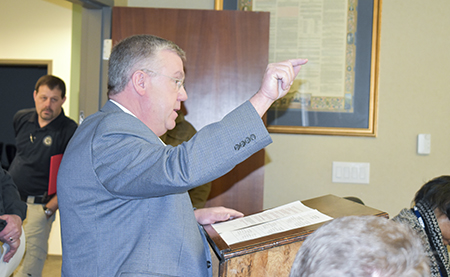 On Tuesday, Sheriff James Woodruff asked the Troup County Board of Commissioners to consider awarding a food service contract for the Troup County Jail and Jail Annex to a local company over the current provider, which is a company out of South Dakota.

The Troup County Sheriff’s Office recently requested proposals for the jail and jail annex, and it received five responses. Skillet Kitchen, which is part of Kimble’s Food by Design, was the only bidder listed from in the county or even in the state. The board of commissioners should vote on a contractor on Tuesday.

“Our only local company that produced a bid was Kimble’s Foods, and they produced a bid that is half a cent less than we are currently paying right now to an out-of-state vendor,” Woodruff said. “So, I’ve come before you today to ask you to consider Kimble’s.”

The bids listed the cost per meal for the jail’s roughly 500 inmates, the number of employees and the number of inmates required. The highest bid was from Kellwell Food Management out of Kentucky, which proposed a cost of $651 to $750.835 per meal. The current contractor, Summit, put in a bid that is lower than its current price, but is “above $600.854” per meal. Comparatively, Kimble’s produced a bid of $600.9844 per meal.

Commissioner Lewis Davis asked how that $0.1304 difference in price per meal would add up over time, since it would add up to $142.788 annually. Woodruff said that he believed that based on his experience with Kimble’s in other areas, the county would receive good service, in addition to keeping the money in the local economy if the commission chose to contract with Kimble’s.

“Kimble’s started doing commissary work 28 years ago at the prison, and we’ve been with Kimble’s for 28 years,” Woodruff said.

“We’ve had no problems ever with commissary for the jail. Now, you know my stand on keeping the money local, doing business locally. They are the only company that is here locally.”

Woodruff also pointed to the possibility of Kimble’s being better equipped to handle emergency situations due to their location alone.

“They have a 2,400-square foot kitchen on Webster Street that is a mile and a half away from the jail, so if our power went out, within a mile and a half, we’ve got our meals prepared, and they can take them down there and serve them,” Woodruff said.

“These other four companies that are out of state — if you are in South Dakota and the power goes out at the jail, they have to try to find somewhere to fix these meals and have them transported to the jail.”

Commissioner Ellis Cadenhead asked how the contractors had performed on health inspections, and Woodruff said that Kimble’s has consistently received good scores. Davis asked if the Troup County Jail had had any problems with the current contractor. Woodruff said that at one point deputies had to ask the contractor to address areas that were not being kept to standard.

The LaGrange Fire Department received two morale boosts this week with the return of Lt. Josh Williams on Monday, and... read more