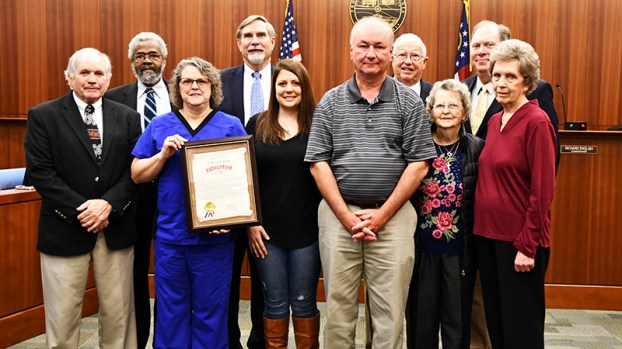 The Troup County Board of Commissioners presented a resolution honoring Sgt. Corey Spates to his family on Tuesday. (Contributed | Daily News)

Intersection to be named in memory of U.S. Army Sergeant

On Tuesday, the Troup County Board of Commissioners honored the life of Sgt. Corey Spates, who was killed during Operation Iraqi Freedom, with a resolution to allow an intersection to be named in his honor.

The resolution will be forwarded to the Georgia Department of Transportation and asks that the intersection of US 29 West Point Road and Pegasus Parkway bear Spates’ name in order to honor the lifelong resident and Troup High alumni’s service to the country. Spates’ family attended the meeting and thanked the commission for helping to move the request forward.

“We appreciate everything,” said Joy Thomas, Sgt. Spates’ mother. “We appreciate all the support this town has given us. Eleven years [since his death] is coming up [this] Sunday, so if y’all would, just remember us as we go through that day again. It is just like the first day.”

Following his death in 2008, it was reported in The LaGrange Daily News that Sgt. Spates was the first local soldier to die in the war in Iraq when he was killed by a roadside bomb in the Diyala province. He was 21 at the time.

“We are very thankful to our city [and county],” said Celeste Spates, Sgt. Spates’ widow.

Sgt. Spates had celebrated his first wedding anniversary the week before the attack. The intersection that has been proposed to be named in his honor was in a part of town he regularly drove through.

“It was very important to them to have something on that side of town,” County Commission Chairman Patrick Crews said.

“That was the side of town that he traveled and he considered home out there. So, it is very fitting that it would be something on that side of the highway.”

Crews said that once the naming is approved at a state level, there will be a ceremony to celebrate the new signage.

Randy Nix, a Republican member of the Georgia House of Representatives who represents Troup County, has worked with Sgt. Spates’ family to rename the intersection, and he said that he was glad to have found a way to honor the fallen soldier.

“I attended his funeral [in 2008] and was just amazed at his accomplishments in a short lifetime,” Nix said in a phone interview. “The way the community came out for the funeral procession that went through town — I think everybody in town was by the side of the road with a flag. It was absolutely heartwarming even in such a distressful situation where you’ve lost a young man like that.”

Nix said that bill to rename the intersection will go before the Georgia House sometime during this legislative session.