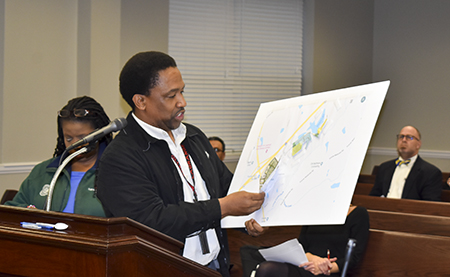 Development on Bryant Lake Boulevard back before city council

On Tuesday, a proposal for a housing development on Bryant Lake Boulevard went back before the LaGrange City Council.

The development, called Long Cane Creek, was narrowly voted down by the council in June 2018 in a 3 to 1 vote, with Council Member Willie Edmondson absent  and then Mayor Pro-Tem LeGree McCamey abstaining. Mayor Jim Thornton was also not at the June meeting.

Developers are allowed to resubmit requests after a mandatory waiting period, and the plan reviewed Tuesday showed no substantial changes from the request submitted last year.

“Currently, this property is a 134-acre wasteland at the entrance to a very nice development called Bryant Lake,” said Dennis Drewyer, the applicant. “It has become sort of a public dumping ground with abandoned road-beds. The entire property is now zoned C-3 for [general] commercial. We think that is not viable, and it was never realistic to have that much commercial at that location. I think we all realize that the majority of the commercial will be going over by the new water park.”

“There is a maximum in the original master development plan for around 900 residential units,” said Kendall Butler, the declarant for the Bryant Lake subdivision. “There are around 500 units already planned in the single-family subdivision part of the community. This is a master planned community. There were many people in our community that were involved in this development plan in 2007, and it follows the development protocol.”

Several residents of Bryant Lake who were in attendance objected to the idea that anywhere near their neighborhood could be considered a “dumping ground.” Drewyer clarified that the statement only referred to the vacant land at the front of Bryant Lake, not the neighborhood. He claimed that old mattresses and other trash had been found lying around the proposed Long Cane Creek development.

There has been no significant development on the property since 2007, when the economic downturn put projects across the country on hold. However, other developers in the Bryant Lake Master Planned Development said that any deviation from the 2006 plan could be detrimental and potentially go against agreed uses that were established with the original plan.

“Approval of this rezoning application violates the development agreement, plain and simple,” said Simon Bloom, who represents a subsidiary of the Silver Company. “Approving this rezoning and adding, actually doubling the number of R-3 or multifamily units from 360 to 730 violates my client’s rights, and my client’s vested rights.”

Drewyer denied that the agreement was still valid because the property was bought in foreclosure.

Several residents from Bryant Lake also spoke against the rezoning at the meeting, citing worries ranging from overburdening school zones to high traffic volumes during the hours when residents leave for work and arrive home. There was little comment from the city council during the hearing, beyond asking for confirmation of certain details of the proposal and concerns.

The zoning will be eligible for a vote by the LaGrange City Council on Feb. 26 at 5:30 p.m. at 208 Ridley Ave. No additional public comment is expected at that time.