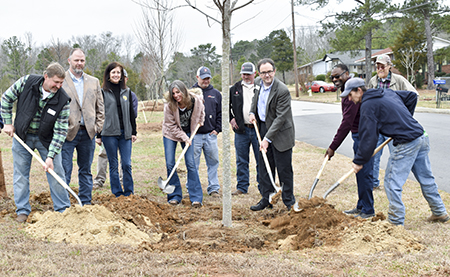 City of LaGrange employees, elected officials and tree board members join together to plant a tree at Eastside Park on Friday. The tree was one of six planted at the park last week. (Alicia B. Hill | Daily News)

On Friday, the City of LaGrange celebrated Arbor Day by planting a tree at Eastside Park.

Arbor Day is typically celebrated on the third Friday of February in Georgia, and the City of LaGrange is one of 155 cities in Georgia to celebrate Arbor Day as part of the Tree City USA program.

The tree was one of six planted in Eastside Park last week as part of the city’s beautification efforts in local parks and areas connected to The Thread trail.

“With recent development of The Thread walking trail, more trees have been placed along this route,” West said. “Today we are prepared to plant trees along the second phase of The Thread here at Eastside Park. [Thursday], we had a ribbon cutting at Southbend Park, which includes the skate park, dog park and also the playground where more than 150 trees have been planted in combination with each of those developments.”

According to city officials, these new trees are far from the only changes coming to the park.

“One of the things the city did in the last year or so was develop a master plan for Eastside Park,” City Planner Leigh Treadgill said. “That came on the heels of the plan to bring trails to this park.”

The master plan that the LaGrange City Council approved in May 2018 included an adult fitness area, a field of wildflowers, a hillside playground, an 18-hole disk golf course and picnic areas. The plan also indicated that some existing features — like the baseball fields — would receive updates. The second segment of The Thread that runs through the park is included in the plan, and the tree planted on Friday was in line with the park plan. City staff and elected leaders have indicated previously that they hope the improvements will encourage more use by citizens — regularly comparing the Eastside Park plan to Granger Park’s renovations.

“This is one of the most scenic phases [of The Thread that] we have, and it is not getting used as much as Granger Park, but I hope that will change very soon as more people see how nice it is over here,” said Natalie Hale, the executive director of Friends of The Thread Trail. “The trees really enhance the whole experience for users.”

According to Hale, over 50 trees have been planted in conjunction with The Thread in the last few months. According to LaGrange Mayor Jim Thornton, those trees planted for official reasons have been just one small part of the city’s efforts to improve the landscape within city limits. Thornton said that citizen involvement has been perhaps the most important component of improving the city.

In past years, the City of LaGrange has planted trees in the Main Street parking lot, Ethel W. Kight Magnet School, Calumet Park, Sweetland Amphitheatre, by the District 4 Public Health Office and near the Exit 18 entrance and exit. According to West, the city has planted over 300 trees.

“It is all part of a larger initiative that I think is permeating the city staff, but also our citizens and our residents to try to do what we can to make LaGrange an even more beautiful place to live, work, play and to call home,” Thornton said. “I am delighted to be able to once again issue the official proclamation for Arbor Day.”

“I’m glad that LaGrange has taken on the mantle of Tree City USA status, because that means that we are proactively managing our trees,” said Sam Breyfogle, a tree board member. “To have a sustainable and valuable urban forest, it can’t be ignored, or it will get away from you and start dying. It won’t be replanted. It just happens so gradually over a generation that before you know it, you don’t have the beautiful forest you hoped you’d have.”

Anyone wishing to plant a tree on their property is encouraged to call 811 to check for underground utilities before they dig.

Professor to bring passion for history to 3D lecture