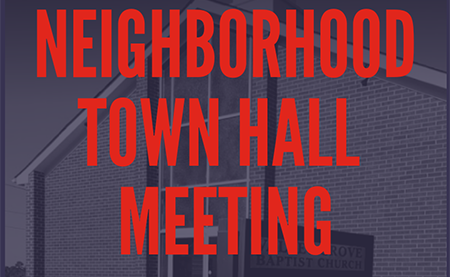 On March 5, the City of LaGrange will host a neighborhood town hall meeting to receive comments and answer questions related to the area around Troup Street.

The meeting will be held at Valley Grove Baptist Church at 126 Grady Street at 6 p.m. The council has briefly discussed how to make the area safer during past meetings, and the town hall will give residents of the neighborhood a chance to let the city know what they would like to see happen.

There were fatal shootings on the street in December 2018 and January 2019, and a home was shot into in July 2018 as well. Additionally, two men received non-fatal gunshot wounds in a dispute on Troup Street in June 2018.

Thornton said he hopes that the city can work with residents to improve the area by lending support, similar to what it has offered to other areas working to improve.

“I am hopeful that we can replicate in that neighborhood a little bit of what we’ve done in Calumet, where we have engaged some of the local residents, and they have taken ownership of the neighborhood and wanted to get active and involved,” Thornton said. “The mayor and council have, as a result, made some investments in that area in terms of sidewalks and lighting and recreation amenities.”

Council Member Nathan Gaskin has encouraged the council to be proactive for issues on the street, and he and Thornton recently walked through the area, discussing some of the points of concern.

“I’ve been working with Councilman Gaskin, because he actually lives in this neighborhood, so he and I have talked on several occasions and walked the neighborhood as well and looked at some of the issues,” Thornton said.