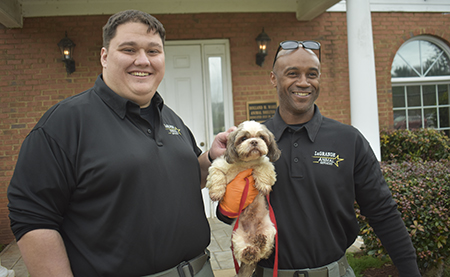 On Tuesday, City of LaGrange Animal Services Supervisor Chris Bussey was honored by the Humane Society of the United States for his leadership in combating animal abuse in the community.

“Chris Bussey is being honored because he not only expanded and improved his position, but he helped to provide other opportunities for other law enforcement agencies to experience professional development by organizing law enforcement programs,” Berger said.

“It is having a big impact,” Bussey said. “It has been an eye opener for a lot of different law enforcement agencies in how popular animal crimes have become as far as dog fighting and animal abuse in general.”

“I’m very proud of Chris,” LaGrange Police Department Chief Lou Dekmar said. “That is one of the most difficult jobs in the city. If you look at where you started when the police department first got animal services in 1998, we had 4,000 animals impounded. Last year, we had 2,812. In terms of calls for service, we’ve gone from 2,754 to 8,370. That is a 67 percent increase.”

“Through working with dog owners, educating dog owners, we’ve been able to reduce the number of dogs or animals that we’ve had to impound,” Dekmar said. “That is also reflected in the euthanasia rate, where we had a high of 3,028 in 1998, and 795 — which is of course still too many — in 2018. That’s a 74 percent decrease. That is a direct result of partnerships that we’ve developed with the [LaGrange-Troup County] Humane Society, Puppy Pipeline, PAWS and the humane society in Columbus, which will come up and take our animals for adoption in other areas.”

Bussey said that LaGrange Animal Services has been able to improve partially because of use of social media and off-site adoption events throughout the community, and he encourages everyone to adopt rather than purchasing dogs or cats from a pet store.

However, Bussey was quick to credit his team.

“It’s nice to be recognized by a national organization, but it’s not just me,” Bussey said. “It is the team we have here at the shelter — David, Natalie and Dakota. We are all working together to achieve the same goals and making sure we combat illegal animal abuse along with all the animals sent to the various rescues and adoptions across the United States.

The City of LaGrange Animal Shelter and the LaGrange-Troup County Humane Society are located at 1390 Orchard Hill Road.