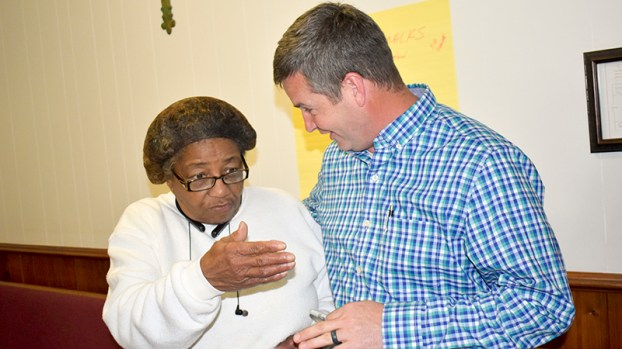 Some comments received more than a few “amens” Tuesday at Valley Grove Baptist Church during a town hall meeting, where city officials and residents discussed how to turn around the Troup Street area.

The meeting centered on what changes are needed to improve the Troup Street neighborhood, where several shootings have occurred in recent months. There has been some discussion on the best way to help the community at the city council level, but Tuesday’s meeting gave residents of the neighborhood the opportunity to tell officials what their top concerns were.

Some of the concerns discussed during the meeting were a need for speed bumps on Kight Drive, pot holes on roads near the city line, resident’s ability to tap onto the sewer system, speeding on Grady Street, utility prices, code enforcement regarding rental properties, the need for a place for older children to ride dirt bikes, a need for cameras on Troup Street, limiting which streets are open to commercial trucks and organizing a group to stop the recent violence.

While some of the requests, like speed bumps, would be relatively easy to implement, LaGrange Mayor Jim Thornton told residents that the big changes would not come fast and regular discussions about the future of the neighborhood with its community leaders will be needed.

One of the major focuses of the city council members during the meeting was what improvements residents would like to see in Jones Street Park. Because the city cannot legally make any improvements to private property, the park space would be the largest area in terms of size that the city could make improvements to.

“I think one of the key factors to stopping the violence and making sure that our communities are safe is having healthy parks, and if you have healthy parks, you can get the children involved in things such as baseball or softball, football, basketball,” Council Member Willie Edmondson said. “Get them involved in something rather than them being idle [and] getting into gangs. We have to have these programs for these children.”

Edmondson encouraged the crowd to “shoot for the moon” with their requests, because even larger requests could be possible with the help of grant funding.

Former City Council Member Norma Tucker was an advocate for renovating the park during her time on the council, but somewhere between city and county SPLOST projects and shifting control of local parks, Jones Street Park was put on the backburner time and time again. Tucker attended the meeting on Tuesday and urged residents to partner with the city to make the park a place that they want to use again.

“It is time for us to take advantage of our partnerships and make this community what we want to see,” Tucker said.

Other areas that the city may be able to improve include sidewalks, roads and utility infrastructure.

“This is a wonderful opportunity to memorialize our efforts in this community,” Council Member Nathan Gaskin said. “This was a segregated community where we are at right now, and it was interesting to hear some of the stories from some of the elders in the community [about the history of the neighborhood].”

Thornton said that the Troup County Archives may be able to help the community preserve some of that history. He also touted active parks and neighborhoods as a crime deterrent, a statement which was backed by attendees from the LaGrange Police Department.

“There is a direct correlation between parks and neighborhood involvement and crime,” LaGrange Police Chief Lou Dekmar said. “They find that those communities that are organized and people look out for each other — they don’t wait for an incident. If something doesn’t look right, they call in. Often times, people say, ‘Well, we don’t want to bother the police if it is nothing.’ We would rather go out to somewhere 10 times that is nothing than miss an opportunity to intervene and somebody get hurt.”

Throughout the meeting, Thornton compared where the Troup Street community is and what needs to be done to the Calumet Park community, which underwent a major transformation following a tragic shooting.

“The city wasn’t coming in and forcing our will on anybody. It was the neighborhood,” Thornton said. “The residents in the neighborhood came together, organized themselves into a neighborhood association. They then came to the city and said, ‘Would you be willing and able to make some investment in our neighborhood?’ Over the past few years, that is exactly what we have done. The city council has made significant investments in Calumet Park, in the sidewalks, in the lighting, has installed cameras, has really made some public investments because remember, the city can’t invest in private property. The city can only invest in publicly owned property.”

A similar change in the Troup Street Neighborhood would require dedicated community leaders who would be willing and able to talk to both residents and the city to ensure that city investment in the area meets the wants and needs of the community.

On Tuesday, the Troup County Sheriff’s Office released information regarding on-going work by CSX that will close crossings at locations... read more