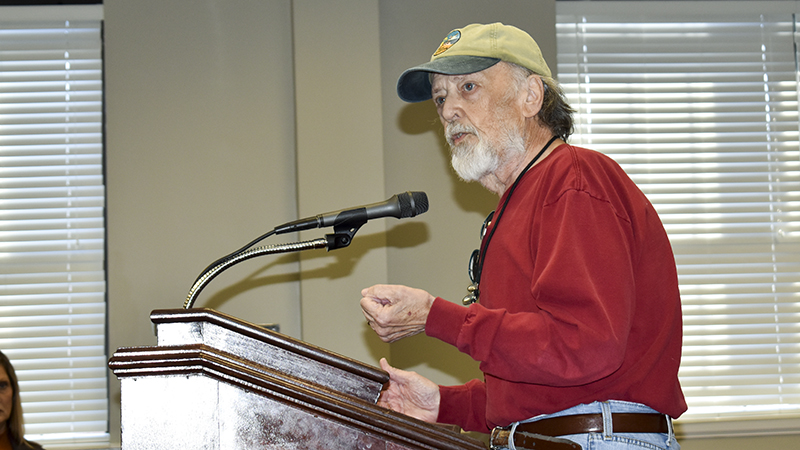 On Tuesday, a group representing local tourist attractions approached the LaGrange City Council, asking it to consider the creation of a local convention and visitors bureau for the purpose of overseeing the city’s tourism funds generated by the hotel/motel tax.

“I’m here today on behalf of our tourism partners, of which you see many,” said Laura Jennings, the executive director of the LaGrange Art Museum. “We are asking the council members on behalf of the many tourism partners that are here — and some who could not be here — to please evaluate the creation of a convention and visitors bureau to deliver the tourism, marketing and product initiatives funded by the hotel/motel tax.”

Jennings served as the spokesperson for the group, outlining reasons why the city needed a convention and visitors bureau, with growth topping the list.

The majority of the city’s tourism budget comes from the eight percent hotel/motel tax. Five percent of that eight percent is required to be used for tourism, with 3.5 percent of those funds funneling through a “destination marketing organization” or private sector, nonprofit 501c6 organization. For three decades in Troup County, that entity has been the chamber of commerce.

Jennings said that tourism partners spoke with a state expert on hotel/motel tax who indicated that the change would be possible.

“In meeting with the tourism partners recently, I think it would be valuable to the council to have a tourism 101 workshop to understand the economic development aspect of tourism and what [the city’s] legal rights are. I think there is a lot of second-hand information going around,” Jennings said. “We would be happy to facilitate that with impartial state representatives who are very knowledgeable about this topic.”

Council Member Tom Gore asked what the advantage of the change would be, and Jennings said that the benefit would be that a visitors bureau’s central focus would be on tourism, regardless of day or time.

“You’ve got a staff that eats, sleeps and breathes tourism,” Jennings said. “So, if they get a call at 7 p.m. from a film scout, they are going to jump in their car, and they are going to go until dark finding a place that would be attractive for a movie. You will have people who will be open when tourists are here, which is typically Saturday and Sunday. You’ll have someone who is trained about tourism.”

LAM was the oldest tourism destination represented at the meeting, but representatives of other, newer tourist attractions also attended the meeting, including Pure Life Studios, The Biblical History Center, the Legacy Museum on Main, and The Georgia Radio Hall of Fame.

“Since I’ve opened that museum exhibit at the Troup County Archives, I’ve contacted the chamber of commerce no less than four times and asked for their support and help and advise on how we can use it to draw some more tourists to the City of LaGrange,” said John Long, co-founder of the Georgia Radio Hall of Fame. “That is what we want. We want people to come see it, and they spend money. That is what tourism is all about. I haven’t heard a word.”

Long said when the museum was in St. Marys, it averaged 4,000 visitors a year, which he credited to the efforts of the city’s convention and visitors bureau. Jennings said that other tourism partners had also been involved in discussions, but were asked by their boards not to attend the council meeting.

During a city council meeting in February, national television host and local resident Joey Mines noted that his calls to coordinate with the LaGrange-Troup County Chamber of Commerce for advertising had gone unanswered, and council members have said during meetings that they have heard of other business owners who likewise received no response to queries.

“As a new member of the city council, it is all very foreign to me, but it is strange because I am thinking back over the last year,” Council Member Nathan Gaskin said. “We’ve talked about this all throughout last year. I think it is ludicrous for us to ignore the will of the people.”

Mitchell asked City Manager Meg Kelsey to reach out to a state representative who could speak to the council on the topic.

“I think we’ll know a little more when we have our retreat and be able to look at both sides,” Council Member Willie Edmondson said.

There were not any LaGrange-Troup County Chamber of Commerce representatives in attendance at the meeting, but Chamber President Page Estes was reached by phone on Wednesday.

“The chamber is very proud of the partnership we have had with the City of LaGrange since 1991 to serve as their destination marketing organization, and the numbers certainly show that our efforts have produced positive results,” said Estes. “We continue to experience strong growth in number of visitors, hotel/motel tax generated and total economic impact of tourism year-over-year. Of course, there is always room for improvement, and we welcome ideas from stakeholders.”

Estes said the chamber of commerce is currently in the process of developing a plan for how to best address growth.

“Tourism has certainly grown with the addition of new hotels and new attractions. We are in the process of engaging a firm to help us develop an overall destination strategic plan, which will take about six months to complete,” Estes said. “I look forward to reviewing the recommendations with the council and all of our partners.”

The LaGrange City Council will hold its retreat at Great Wolf Lodge on March 26.

Duracell named Manufacturer of the Year