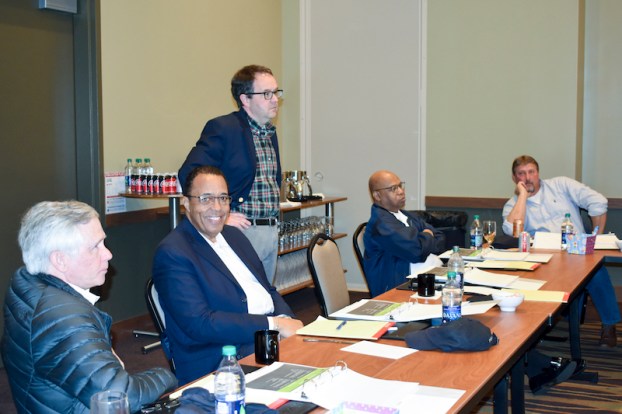 For years, City of LaGrange officials have heard requests to provide some sort of public transportation and improve major roads. On Tuesday, a possible solution appeared when the LaGrange City Council discussed a way that public transportation could be provided to locations such as Kia Motors Manufacturing Georgia, grocery stores and the hospital, while encouraging stalled road projects to finally move forward.

During its annual retreat, the LaGrange City Council discussed the possibility of coordinating with Troup County and the cities of Hogansville and West Point to allow citizens to vote on a 1 percent Transportation Special Purpose Local Option Sales Tax. If approved, the estimated $60 million in funds brought in over a 5-year period could be used to provide public transportation within the county and provide local support for Georgia Department of Transportation projects.

“Anytime it is an election year, people ask about [public transportation],” LaGrange Mayor Jim Thornton said. “The [LaGrange-Troup County] Chamber of Commerce — two years ago — their Leadership Troup class took on public transportation for discussion, and they studied it. I went and listened to their report at the end. We put a committee together at one point.”

“We always come back to the same issue — money,” Thornton said. “Because we are not an entitlement community — meaning we don’t have a population of 50,000 or more — we are not eligible for certain federal grants.”

The retreat on Tuesday was the first public meeting where a T-SPLOST was seriously considered as a means of funding public transportation, but exact details of the project were not determined at that time. However, several council members voiced their approval of taking the idea to voters, if it can also receive the support of Troup County’s other local governments. The cities of West Point, LaGrange and Hogansville as well as Troup County would all need to support the proposal in order for it to be placed on the ballot for voter consideration. Thornton said that from conversations with the other mayors and County Commission Chairman Patrick Crews, he thought the T-SPLOST proposal could benefit the entire county.

“What if you allocated some of that money — $20-$25 million — to do a transportation system, and the other money was used to widen Vernon Road, which is a priority that the city has talked about,” Thornton said. “Repaving Kia Boulevard is a priority for West Point. Working on the S-curve connector on the north side of town where New Franklin Road [comes into the city is a possible project]. These are just ideas on the table.”

Consideration of the county-wide proposal would have to be initiated by the Troup County Board of Commissioners, who have not yet discussed the idea of a T-SPLOST. Then, if the Troup County Board of Commissioners likes the concept, the board would study how the funds would be used. If all local governments decide to support the concept, the T-SPLOST could be on ballots for voter consideration as soon as November 2019.

“I think it has the potential to revitalize a lot of the downtown areas, especially in a place like Hogansville,” Council Member Nathan Gaskin said. “I’m all for it.”

Gaskin and Thornton noted the potential for county-wide public transportation to benefit local industries by providing alternative transportation for employees, like those who have car trouble.

Several years ago, Troup County residents did have the opportunity to vote on a T-SPLOST proposal for a 10-county region of the state, including Troup, but it did not pass at that time. Thornton attributed the failure to the wide variety of needs for the large area that would have been difficult to meet with a regional public transportation plan. The option discussed Tuesday has the allure of being focused on a smaller geographic area.

Unlike most SPLOST types, T-SPLOST funds could be used to cover transportation operations as well as capital investments. However, 30 percent of the funds would be required to be committed to match DOT projects.  The LaGrange City Council will meet again on April 9 at 5:30 p.m. at 208 Ridley Avenue.

Life has been busy over the past 10 weeks for Maurice Raines, who until recently served as the post commander... read more