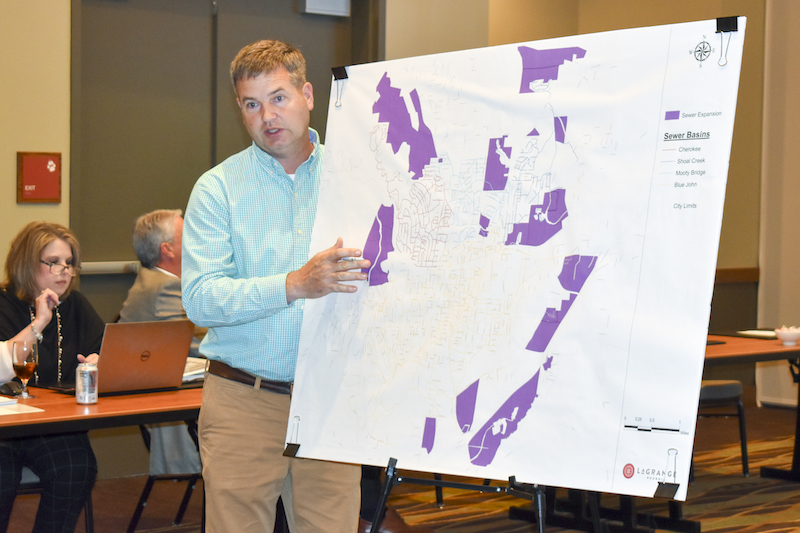 The LaGrange City Council used part of its retreat Tuesday to discuss parts of the city that could easily be attached to existing sewer systems if development takes place.

The discussion centered primarily around areas where large developments are possible and would require little additional investment from the city to offer service.

“We wanted to share with you the land that is available now that can be easily sewered,” City Manager Meg Kelsey said. “I think there is a lot of talk going around town about the city offering more sewer, and I just wanted to make sure that [council members] were aware of how much sewer capacity we have available today.”

According to information released during the meeting, there are several large properties throughout the City of LaGrange that are ripe for development and have easy access to sewer lines. Some of the areas mentioned by name were possible developments near Bryant Lake, Long Cane Creek, The American Legion’s Veteran’s Village on Hamilton Road, LaGrange Station on Whitesville Road, Lexington Park on Upper Big Springs Road, The Exchange at 1105 Davis Road, River Mill and River Creek, Homecoming on Youngs Mill Road, Summer Breeze on Hammett Road, North Point near Hammett Road and several large, privately-owned sections of land. Estimates for capacity were generally based on plans that were shared with the city council during meetings.

A developer in attendance at the meeting asked if the city could make information available on which sewer lines could be gravity fed, which means the property would not require excessive grading and/or a pump station to install sewer. Mayor Jim Thornton said that information could be used to show developers where they could get the most bang for their buck.

“These are areas that have sewer available to them without any major expansion, but the second phase of that may be to say, ‘Of the purple areas, which ones of them gravity feed,’ and maybe put that in yellow,” Thornton said. “To that point, that makes it very inexpensive for a developer to develop.”

Gravity fed lines cost little to install compared to lift stations, which could cost around $2.5 million for some of the areas mentioned.