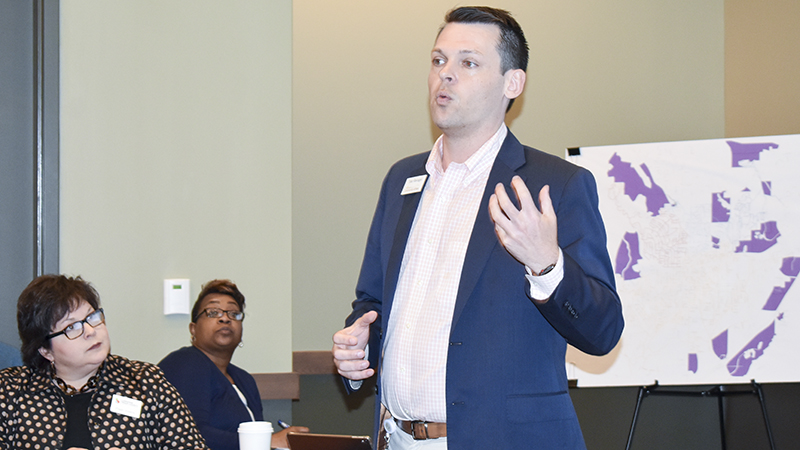 The management of local tourism funds was discussed at length during the LaGrange City Council’s annual retreat on Tuesday at Great Wolf Lodge.

The importance of this planned discussion had been further reinforced earlier in the month by a group of tourism partners, who requested that the council consider allocating the responsibility of tourism spending away from the LaGrange-Troup County Chamber of Commerce to a visitor’s bureau.

Before discussion began at the retreat, the city council heard from Tyler Reinagel, the director of the office of planning and research for the Georgia Department of Community Affairs. Reinagel explained exactly how funds from the hotel/motel tax can be used, and LaGrange-Troup County Chamber of Commerce shared how tourism funds are currently being spent locally.

The LaGrange-Troup County Chamber of Commerce has managed the City of LaGrange’s tourism budget for 28 years as a qualifying 501(c)(6) organization, and the region has seen major growth during that time. However, some council members questioned how effectively the chamber has handled that growth.

Gaskin also expressed concerns for which businesses are receiving attention in terms of tourism spending, noting a local drag strip as one of the businesses that has been ignored, even though it would be eligible for promotion or other support under laws regulating the tourism spending. Mayor Jim Thornton did caution against too much government support for a private business.

There were also questions surrounding how some of the tourism funds are being spent, with a specific focus on the use of some tourism dollars to purchase advertising in Troup Trends, which is a LaGrange-Troup County Chamber of Commerce publication. City Council Member Mark Mitchell has reviewed the records of tourism spending made available since a meeting when concerns were brought up last year.

“What I see in the checks that I received is that tourism money is funding the development of Troup Trends [through advertising], which is a locally-published magazine for our community and in my opinion is not tourism,” Mitchell said after the meeting.

Mitchell said that he wanted to see a clear division between tourism and other chamber functions, and Estes said that the chamber of commerce is working to address those concerns and others that have been raised.

“Our board is committed to maintaining our long-standing partnership with the City of LaGrange and we look forward to meeting with Meg [Kelsey, City Manager] to discuss further the issues and concerns addressed during the council retreat,” Estes said after the meeting. “Although we already maintain separate bank account and budget for the tourism operations, we understand the need for a more formalized internal separation. That will include a thorough review of our labor distribution and analysis of what skills and talents are needed to bring to the tourism division to ensure that we continue the upward positive trend in revenue, visitors and economic impact. We are also committed to engaging our tourism partners — those with similar outlooks and those with differing or new approaches — in our operational plans. I encourage anyone who is interested in tourism to please contact our office to discuss your ideas and to join our tourism committee.”

City Manager Meg Kelsey confirmed that she had personally reviewed the tourism spending records and spoke to the chamber on areas where funding use did not line up with the wishes of the city council.

Council Member Willie Edmondson also asked for a clean distinction between the tourism element of the chamber and the rest of the chamber’s business dealings, a request that was echoed by other members of the city council, with some calling for separate directors for the different sections of the chamber. However, there was some question over how much control the city council would have over the structure of an organization managing the use of tourism funds. Although the city is legally responsible for how the funds are used, the entity using the funds legally has to be separate from the city and county government.

Council Member Jim Arrington said that he believed that having more in-depth conversations on how tourism funds are used will be vital in the future, a sentiment that was shared by many council members. That continued conversation may prove to be the deciding factor in the future management of tourism funds.

According to Estes, the LaGrange-Troup County Chamber of Commerce will speak to the LaGrange City Council again at the end of the fiscal year to explain what changes have been made.

There was also brief discussion of tourism concerns that have been shared with the LaGrange City Council and how those are being addressed. Council Member Tom Gore asked about action regarding the Georgia Radio Hall of Fame, and Gaskin reiterated concerns for lack of attention for the drag strip. Estes indicated that efforts have been made to work with the Georgia Radio Hall of Fame.

As discussion closed on tourism, the LaGrange City Council did hear an option for another group to manage tourism in the form of the recently-formed Troup County Development Authority, which is also a 501(c)(6).

“I’m not looking for action,” said Forrest Johnson, on behalf of the new organization. “We’re just asking for consideration.”

Johnson is closely tied to the Troup County Archives, which is currently hosting the Georgia Radio Hall of Fame.

As is standard for LaGrange City Council retreats, no formal action was taken during the retreat.