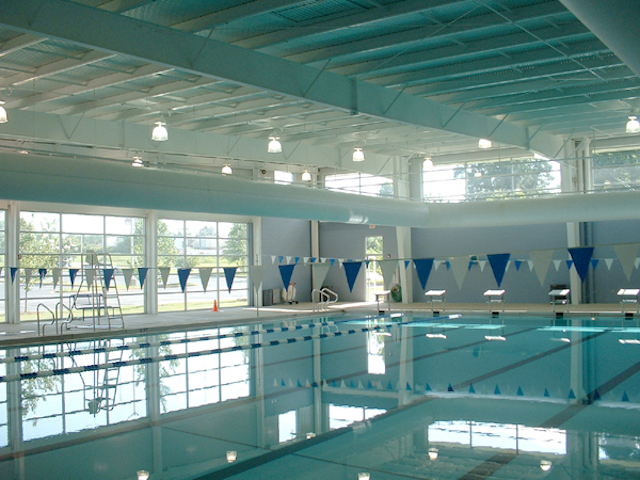 The Mike Daniel Recreation Center natatorium was the center of discussion during the Troup County Board of Commissioners meeting on Tuesday. - Contributed

In a break from standard procedure, on Tuesday the Troup County Board of Commissioners heard from two of the companies who placed bids to replace the de-humidifier and HVAC system for the natatorium and locker rooms at the Mike Daniel Recreation Center. However, the board ultimately voted three to one to follow the staff recommendation and award the project to Atlanta-based United Maintenance.

The proposals were discussed at length during the Thursday Troup County Board of Commissioners work session when Mike Daniel Recreation Center Facilities Director J.J. Kuerzi outlined the need for the new system as well as the consideration process to that point and shared the opinion of expert consultants on the project. Tuesday was the first time representatives from the companies addressed the Troup County Board of Commissioners.

“Given a system that is this critical to proper operations, having a package unit that is assembled inside a cleanroom factory is better and more apt to last longer versus a system that is pieced together with a series of pumps, valves, chillers and a separate coil,” Jackson said. “I have one unit that is more efficient than the engine of the other design. The other design has more components that are also going to consume power.”

Jackson Mechanical proposed the same type of system that is used in the U.S. Olympic training pool in Colorado Springs. Davis also asked if the climate in Georgia compared to Colorado would impact the unit’s effectiveness in a hotter, more humid environment, and Jackson said it would not. Commissioner Morris Jones asked if a similar unit had a successful track record in Georgia, and Jackson said that none of the systems had been installed in the state for the 10-year period recommended to assess a unit’s success.

“At the end of the day, I’m not coming before you to argue to deal locally,” Jackson said during his presentation. “This is a very important decision for the health and well-being of Troup County. The Mike Daniel Center is the cornerstone of this community. It is important.”

“One of the reasons that this design came about is I was so sick of seeing people own this equipment — and it is usually municipalities, and it is taxpayer money — wasting tons of money,” Anderson said. “Carrollton was spending $50 to $70,000 a year after year three to maintain their air equipment. Their building was rusting out. As soon as the equipment stops working right, the building starts rusting. It has nothing to do with the building’s duct work in my opinion. That is why it is not required by code. It is a recommendation.”

United Maintenance installed a similar system in Carrollton around 2013.

“When we went into Carrollton and we changed their stuff out, we heard a lot of this same stuff from other people that ‘it was going to be an energy hog. It wasn’t going to work,’” Anderson said. “It has worked fantastically. They have seen a reduction in power bills.”

Anderson said the city had only spent $2,500 on repairs to the system. He said those repairs were necessary due to lightning and power surges, not the system itself. United Maintenance has also installed a system at Wesleyan College in Macon, and it had a recommendation from Georgia Power for energy efficiency.

Jackson Mechanical’s bid for the project was $649,998 while United Maintenance’s bid was $572,386. Jackson said that the difference in price was related to his proposal replacing the duct work, but Anderson said that under his proposal duct work replacement would not be necessary.

The county received recommendations from the Troup County Recreation Commission, the county purchasing department and building maintenance in favor of using United Maintenance for the project. The project had already been through a complete review process prior to Tuesday’s meeting.

The project is being funded through a Special Purpose Local Option Sales Tax V bond. County Manager Eric Mosely said on Thursday that cost savings on the project could be used for work on metal beams and locker room floors in the Mike Daniel Recreation Center.

The Troup County Board of Commissioners will meet again on Thursday at 9 a.m. for a budget work session.