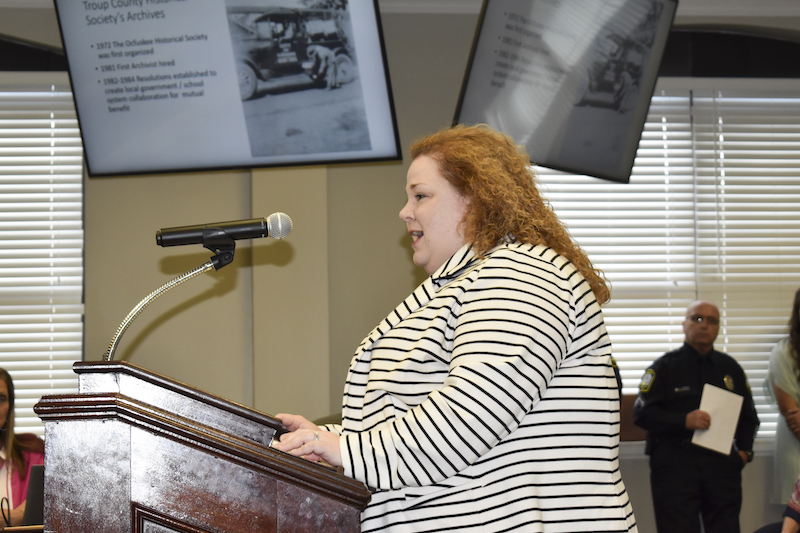 Shannon Johnson speaks to the LaGrange City Council on Tuesday night. Johnson, Executive Director of the Troup County Archives, asked for funding to help increase the Archives' capacity for storage. - Alicia B. Hill

Government offices produce a lot of paper, and since official paperwork has to be maintained for years after it is created, those papers take up a lot of space — approximately 7,400 linear feet for the City of LaGrange alone.

On Tuesday, the Troup County Archives presented the LaGrange City Council with a request to help fund renovations to the facility where official city documents are stored, in order to make the space more efficient.

“In its current condition, with limited shelving, Fort Georgia hold 2,800 boxes, has no HVAC and is poorly lit,” said Shannon Johnson, Executive Director of the Troup County Archives. “Most of the boxes… are stacked on the floor to prevent us from stacking any higher than four boxes because the weight will crush the bottom.”

According to Johnson, the total cost of the renovations is expected to be $561,275.73, including contingency funds. Roughly $400,000 of the cost is for shelving. The request to the City of LaGrange was for approximately $187,000.

“With the proposed renovation and addition of mobile shelving, this same 5,500 square feet will be able to accommodate over 8,800 boxes,” Johnson said. “With proper storage and disposal, those 8,800 boxes will be enough space to last us until at least 2058, probably a little bit longer — someplace between 40 and 50 years if our calculations are correct.”

According to Johnson, Troup County and the Troup County School System are expected to put forth equal contributions to the project, which benefits all three entities by freeing them from having to maintain and search for archival records. In some cases, those records can date back a century.

“Rather than maintaining three separate storage facilities, three separate staffs, three separate offices, the archives accommodates the needs of all three of those entities,” Johnson said. “We currently hold over 7,400 linear feet of records belonging to the City of LaGrange. Those vary drastically from the earliest minutes… to engineer drawings, traffic citations from a few years ago.”

Johnson provided the city council with an overview of the facility and significant safety features during the meeting. The records are stored in an underground concrete bunker near First United Methodist Church in LaGrange, where they are safe from tornadoes. Council Member Willie Edmondson asked if flooding is a concern for the bunker, and Johnson said it is sealed from flooding. However, there was some concern for humidity without a functioning Heating and Air Conditioning unit.

Johnson said that the Troup County Archives hopes to also serve the City of Hogansville in the near future. Council Member Nathan Gaskin asked if Hogansville would need to pay a portion of the renovation fee if it began using the Troup County Archives. Johnson said that Hogansville’s archival records would take up dramatically less space than the other entities, so it would not be expected to help pay for the renovations.

Due to the confidential nature of some of the documents stored in the facility, it is not open to the public. Archives staff typically retrieves requested documents for LaGrange, Troup County and the Troup County School System when they are needed.