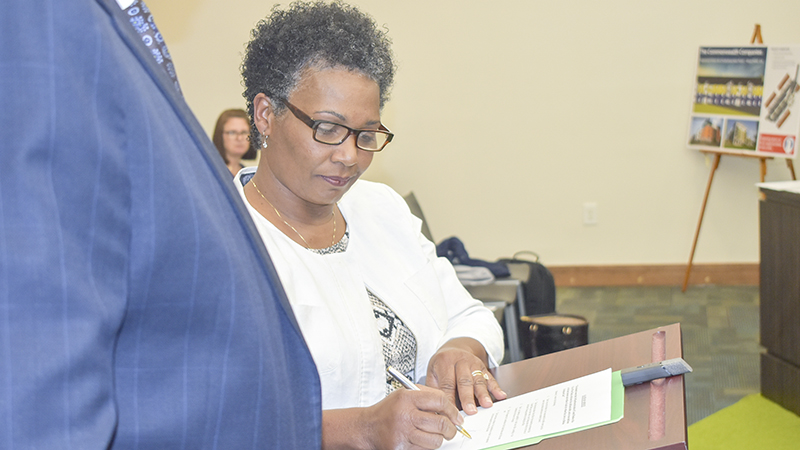 “It’s a good feeling,” Williams said. “I’m a lifetime resident of West Point, and I’m very concerned about our city. It’s a great city. We’ve made a lot of progress in the last several years, but we’ve got lots of potential. Moving forward, I would like for us to build upon what we’ve done and to continue to grow this great city. This is a wonderful place to live, work and raise a family.”

Williams’ fills the council seat that was vacated by Benjamin Wilcox, who stepped down in January to accept the West Point municipal court judge pro-tem position. Williams was one of three candidates along with Amanda James and Tracy Bandy.

Williams won the vote 4-1 to fill the council seat in April, with Joseph Downs, Henry Hutchinson, Gloria Marshall and Sandra Thornton voting in favor of her appointment. Gerald Ledbetter voted against Williams.

Mayor Steve Tramell recused himself from the vote because he expected Williams to run for mayor again this fall.

Tramell defeated Williams in the mayoral race by 25 votes in 2017.

Williams confirmed that she did plan on running for mayor a third time in a few months after Thursday night’s meeting.

“This opportunity came along to fill an unexpired seat,” Williams said. “I welcomed the opportunity, and [I’m] pleased that the council voted me in as the appointee out of three good candidates. Some of the criticism that I’ve received when I ran for mayor both times is that I have not served as a council member. Although that’s not a prerequisite for running for mayor, we’ve had several mayors who have done great jobs who have not first served as council members. It’s not a prerequisite, but if that’s the standard that I’m expected to live up to, this is my opportunity to address that.”

Williams said that she wants to use the next few months observing and learning the city’s vantage point from a council member’s perspective.

“My goal is going to be to listen and get a bearing on where things are,” Williams said. “[I want] to be in a position to assess the best direction to move forward.”

Williams said that she hopes to help the city focus more on the poverty that exists in the community as well as promoting unification.