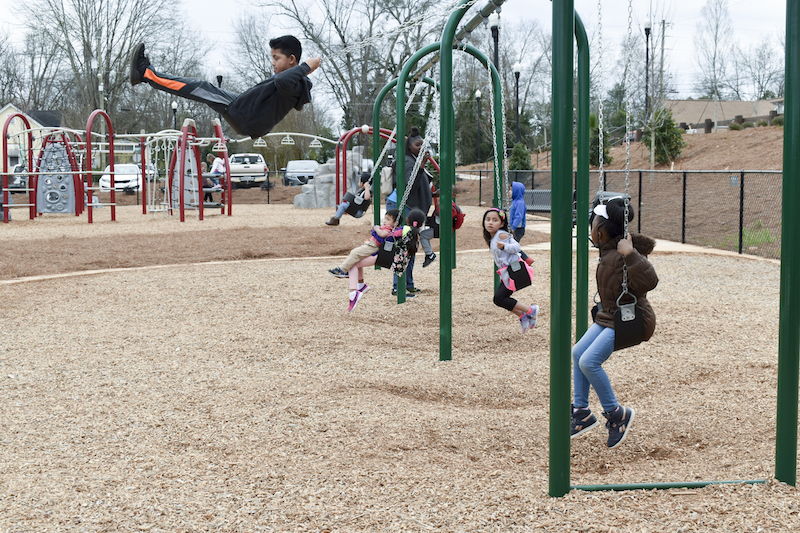 Southbend Park, which has been a community hit since opening in February 2019, has received more traffic than originally expected. The city council is now discussing putting bathrooms in the park. - File

Southbend Park has seen heavy use since it officially opened in February, and city officials are currently in the process of addressing the residents’ biggest complaint regarding the new facility — the absence of restroom facilities.

During the City of LaGrange’s city council work session on Tuesday, Council Member LeGree McCamey asked if there were any plans to include a restroom facility installed in the park area, and City Manager Meg Kelsey said that a plan is being put together to install restroom facilities. However, the logistics of the restroom facilities are still under discussion.

“Leigh [Threadgill, city planner,] has been working diligently with the [Callaway] Foundation on that idea,” Kelsey said. “When we first started talking about the project, bathrooms came up, and the foundation was very against that idea.”

Public restrooms in park spaces are seen by some as a liability. However, the lack of any location to use the bathroom near the park has resulted in citizen complaints.

Kelsey said that since the park opened, it has been more heavily used than was initially expected, which has made bathrooms a highly-requested feature at the park.

“They are now more open to the idea of bathrooms, so Leigh is doing some research, and they are also doing some research about different models and different communities and what would be the best fit there,” Kelsey said. “There is a lot of work going on behind the scenes to address that issue, because that is probably the number one concern that I hear about the park, is there are no restroom facilities there.”

Threadgill said that the location of the bathroom facilities would be dictated by the location of sewer lines, with consideration for where the property line falls in relation to the CSX railway property.

“We are looking at a very modest facility, probably two stalls,” Threadgill said. “The research I did said that would handle 90 users an hour, and that seemed like enough.”

The City of LaGrange is considering a contractor who recently installed restroom facilities in Hogansville, which have received positive reviews.

“It is very low-maintenance, vandal-resistant, sort of minimalist, so that you don’t have a lot of issues with cleaning,” Threadgill said. “I know security is a big concern and trying to make sure we have visibility of the building, so we are talking about it being right off of Bull Street, where you can see it. There is a significant grade change right there.”

Council Member Nathan Gaskin asked what the LaGrange Police Department’s feedback on possible restroom facilities at the park, and Threadgill said that she has talked to LPD about issues the city is addressing in the park.

Mayor Jim Thornton asked how events at the Downtown LaGrange Development Authority plaza near Wild Leap Brew Co. would impact the proposed facility’s use, and Threadgill said that since the park restrooms would be open to the public, people from those events could use the park restrooms. However, the use of restroom facilities may be limited to park hours.

The city council also discussed installing cameras outside the restrooms to monitor for any activity that should not be happening. Those cameras would be in addition to existing cameras in the park and the Wild Leap Brew Co. parking area.

Gaskin also asked that other security measures like panic buttons be considered at certain locations in the city.

The city council also received an update on progress at Jones Street Park, where improvements have been requested by residents. Kelsey said that the dilapidated concession stand was demolished on Tuesday morning in order to improve visibility and the appearance of the park. She said that other improvements will be forthcoming.

Other topics covered during the evening meeting included:

The LaGrange City Council will meet again on May 28 at 11 a.m. at 200 Ridley Avenue for its annual budget meeting. It will hold a regular meeting that evening at 5:30 p.m. at 208 Ridley Avenue.