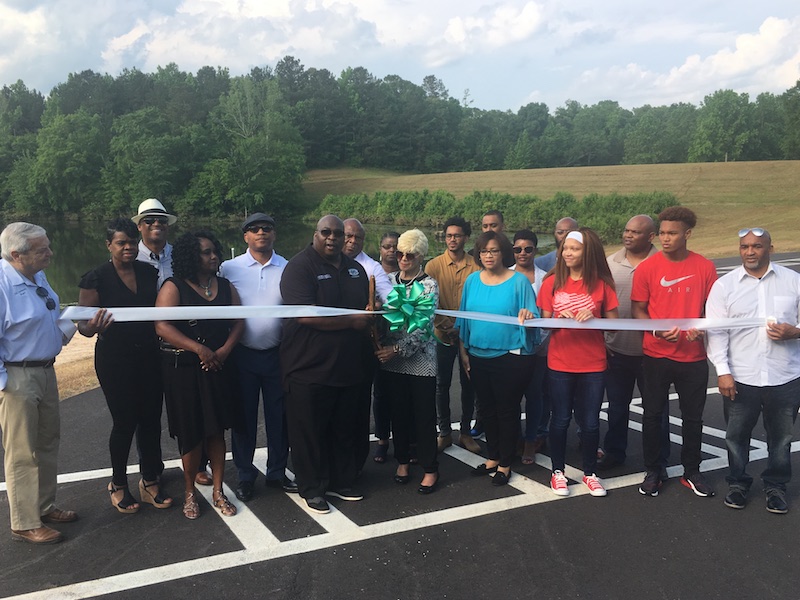 HOGANSVILLE – A sunny Friday morning saw a crowd gather at Lake Jimmy Jackson in Hogansville to celebrate the official ribbon cutting of the lake and the completion of Phase I of the lake project. The lake, named after former mayor Jimmy Jackson, will allow members of the Hogansville community as well as visitors to access a premier and pristine fishing destination, which can potentially lead to more individuals moving to the area.

“This represents one step in a plan for the county and for the city in terms of recreation and adding the amenities we feel are necessary to attract people to our area,” Hogansville Mayor Bill Stankiewicz said on Friday morning. “We had a housing meeting last night and our consultant explained that the biggest determining factor in bringing people to our area will be the type of amenities that are offered. This is just one more step in that process.”

The lake was originally built as a flood-control lake in the 1960s, before transitioning to a water source much later. The lake also bears the name of former Mayor Jackson, who was a long-time advocate for opening the lake as a recreational fishing opportunity before his death in 2014.

“I would be remiss if I didn’t mention we named this lake after the former mayor, former president of the school board, former council member Jimmy Jackson,” Stankiewicz said. “For many years, he had an abiding interest in this lake and its recreational aspects and allowing citizens to fish in this lake. There wasn’t a week that went by when Mayor Jackson didn’t come into my office when I was the city manager and ask, ‘when are we going to open up the lake for fishing?’ Well, today is the day.”

Jackson’s son, Reginald Jackson, currently sits on the Hogansville City Council and spoke to the importance of the lake to his father, as well as the opportunity for the community to access this new recreational venture.

“We’re very appreciative of this day, we look forward to citizens enjoying this lake to fish in,” Reginald Jackson said. “This means a lot. It was a lifelong dream of his to serve the citizens of Hogansville, for this to happen in his honor is real heart-touching. The last line of his obituary said ‘gone fishing,’ I know he’s looking down and smiling today.”

Future phases of the lake will include picnic and park benches, along with standing fishing structures that will allow individuals to fish without the need for a boat. The lake is located at 1430 Blue Creek Road in Hogansville.