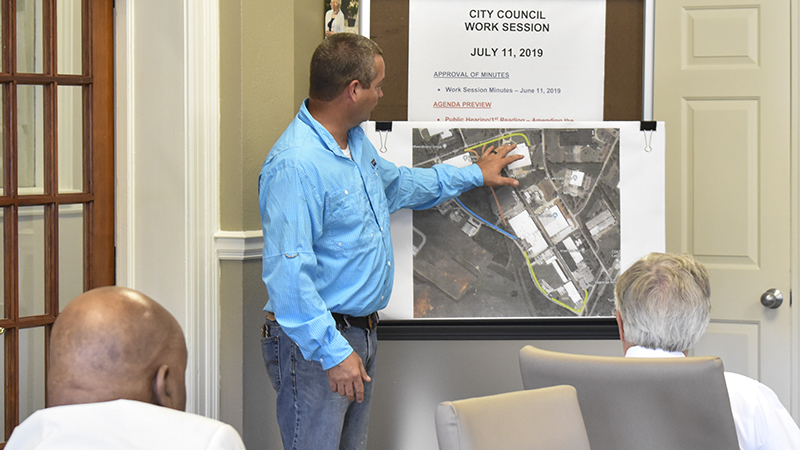 City of LaGrange Public Services Director Dion Senn points to the proposed location for a sidewalk in the industrial park. (Alicia B. Hill | Daily News)

The City of LaGrange is currently making plans to make walking near some of the city’s biggest companies a little safer.

On Thursday, the LaGrange City Council gave the city manager authority to move forward on installing sidewalks near Interface at the request of the company. The sidewalks are expected to create a safer path for employees of Interface and nearby companies to walk to their cars and exercise during lunch break.

“Currently, their employees are having to walk through this lot to this area where there are no sidewalks, and they have to cross over a railroad crossing,” City Manager Meg Kelsey said. “It is not an active track, but my understanding is that the development authority owns that track, and we’ve reached out to them about the possibility of us putting a sidewalk connection there for the employees to be able to get easily into this facility that they work in. This is an immediate concern for Interface, who has put some substantial investment in our community in the last year with reconstruction and capital investment in LaGrange.”

The LaGrange City Council has discussed the need for sidewalks in areas with heavy foot traffic in the past, but the cost of those sidewalks is still a consideration.

“Those [railroad crossings] can only be done by city crews,” said City of LaGrange Public Services Director Dion Senn. “We are the only ones allowed to work on the railroad right-of-way. Those two crossings are going to cost us about $7,000. They are about $3,500 apiece to make those crossings.”

Gaskin also said that he would like to see Interface hire more workers, instead of relying on temp agencies, especially with city crews installing the sidewalk.

“There are several other businesses around Interface, but Interface is one of the only ones that has such a large campus,” Senn said. “They own pretty much this whole area between Orchard Hill Road and Shorewood Drive.”

Senn said that the size of Interface doesn’t mean the company should be treated any differently than other businesses, and Interface would not be the only company to benefit from sidewalks at those locations.

Additionally, Kelsey said that sidewalks are being considered between the Beltline Community and the industrial park, which would allow citizens to walk to work.

“I really envision that we need sidewalks for those folks to be able to get to their jobs safely,” Kelsey said. “I think there are other areas in the industrial park that we need to look to in the future to put sidewalks in.”

It was unclear as of Thursday when any construction on the proposed sidewalks could begin.