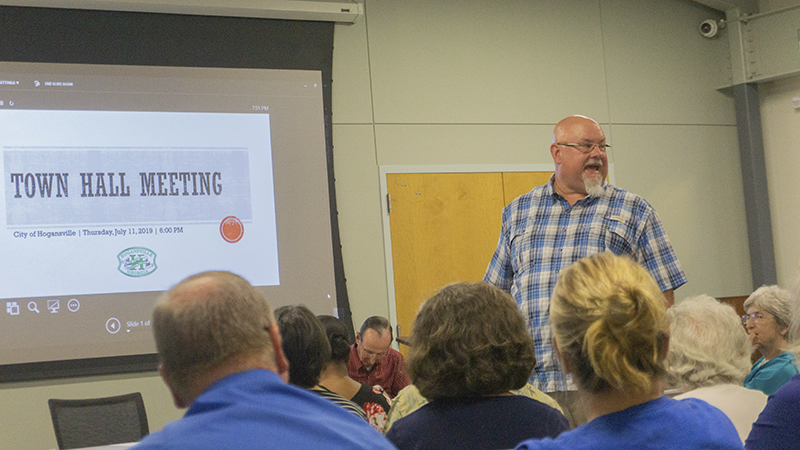 Members of the Hogansville community were given the opportunity Thursday night to discuss or ask questions about any changes or concerns going on in town at the town hall meeting. (Jenna Oden | Daily News)

The City of Hogansville received praise in addition to comments about what is working and what is not working in the city during a town hall meeting Thursday night.

Mayor Bill Stankiewicz began the meeting with news and a presentation of the submitted final architectural plans for the Royal Theatre. Stankiewicz proceeded to provide slides of the plans and announced that the renovation “will not incur any debt from the city, and it will be 100 percent funded with either grant money or SPLOST money.”

“What plays or what is going to take place there [Royal Theatre] in this renovation?” asked citizen Willie Cameron during the meeting. “Will it be plays or what?”

The mayor responded that it is not yet known what, exactly, the content shown at the theatre will look like, but the offerings will be robust.

Members of the community discussed the different water pressure problems they were having, ranging from problems with water pressure being too high and too low. The mayor replied that the city is trying to fix that problem as a whole.

“It is wonderful news that we are about to add 314 new large homes, plus three or four senior residents,” Mary Margaret Ware said. “But the problem now on our street is that we do not have water because the water pressure is so low. I know the city is seeking funds to address the really terrible water pressure on the west side of (U.S. Highway) 29, but there are other parts of the city that are having trouble, too.”

One member of the community said that the pipes and water problems are representative of the city.

“Touching on all of that, I am an engineer,” Mandy Neese said. “I’ve built more interstates than most people have. Hogansville is falling apart, and you’re crazy to think it’s not.”

Neese said that the staff is working hard, and that people need to listen to David Milliron and what the engineers are saying.

Neese said to fix the problems in the city, all must start being held accountable and taking care of their land, trash and businesses.

“We’ve got to rebuild this place from the bottom up because we are broken. It is broken,” Neese said.

Parks were also a topic of conversation from the community. Cameron informed the council that the drainage problem at one of the parks was causing problems.

“I want to address this to the (Troup County) Parks and Recreation Department who is in attendance tonight,” Cameron said. “We have the most beautiful parks in Hogansville, in Troup County, but there are so many families that go out there, and we have to bring our own fans because there are no ceiling fans.”

Cameron also said that the basketball court on Pyne Street has a large amount of mud that covers the court when it rains and would like to see a resolution to fix that problem.

“Even if we pressure wash it, it comes right back,” Cameron said. “It is a beautiful basketball court, but would it be possible to cut a ditch at a certain degree, so mud won’t run on the court.”

Milliron said he would follow up with the county manager and see what they could do.

The mayor concluded the town hall meeting thanking everyone for their comments, questions and praises.

“I appreciate your willingness to share,” Stankiewicz said. “I believe good governance is the involvement of those who are governed, and this is one way to do that.”

Fred’s to close in Hogansville