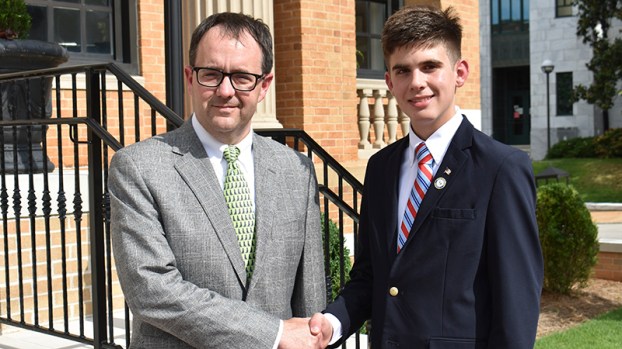 McLeod was an eighth grade student at Gardner Newman Middle School during the 2018-2019 school year. He is a rising freshman at LaGrange High School.

The Optimist International Oratorical World Championship will be in St. Louis, Missouri at St. Louis University July 18-20. The winner will win $22,500 in scholarship money. McLeod won $2,500 at the GATEway District competition.

McLeod is a rising freshman at LaGrange High School. He is a member of Young Singers of West Georgia and the Lafayette Theatre Academy at LSPA. He was an active member of the Gardner Newman Middle School Band and will be a part of the LaGrange High School Marching Band playing saxophone in the fall.

Render also served as a page for Georgia State Representative Randy Nix in February 2019. He loves politics and plans to be in politics one day.

He has enjoyed the assistance from Thornton in helping to prepare for his competition in St. Louis.

The City of LaGrange is currently making plans to make walking near some of the city’s biggest companies a little... read more