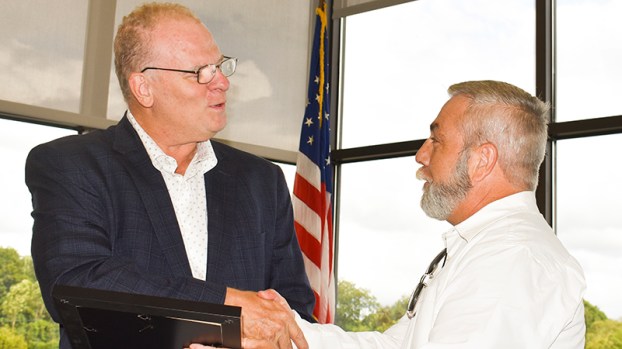 He started as a patrol officer in 1989 and worked his way up the ranks as an investigator, K9 officer, lieutenant and spent the past 18 years as a captain.

“I have been blessed for 30 years to work for the city of West Point,” he said Monday at a West Point City Council work session. “My retirement is about me and my family, and they have earned it just as well as I have.”

The West Point City Council honored Fawley with a resolution. Although he said his family was a big part of his career, he had a great team behind him.

“From the chief of police to the other captains, to the lieutenants and all the officers, it is all a team effort,” Fawley said. “My career is about the whole team and the whole city.”

He said he’d spent time in all parts of the state throughout his 30 years, and West Point has a different feel than everywhere else.

“There is one thing I see different in West Point, and I have been all over the state, it’s that the city works together to do what is best for the citizens,” Fawley said.

Fellow West Point Captain Kevin Carter said Fawley started as an intimidating presence for him when he joined the West Point Police Department. However, throughout the years, Carter said he’d learned so much from the veteran investigator.

Carter said the hardest part of being partners with Fawley was calling him Robert, instead of Captain Fawley.

“It was hard for me to call him Robert because I have been used to Captain Fawley for so many years,” he said.

Carter said Fawley deserves every ounce of his retirement, but there will be a hole left in the police department.

“I hate to see him go,” he said. “We are losing a lot of knowledge and dedication.”

West Point Mayor Steve Tramell presented the resolution to Fawley Monday night and said the city would miss him. On Wednesday, Tramell told the Valley Times-News that Fawley was always there when needed.

“When I think of Captain Fawley, the work I think of is dependable,” he said. “I could always count on him. I knew he would get the job done.”

Looking back on his career, Fawley said his favorite time in law enforcement was working patrol.

“You really get to interact with the public,” he said.

“As an officer, you are proactive, and you spend time walking the neighborhoods and actually creating relationships and bonds with the citizens.”

Two men have been arrested and a third is on the run after allegedly being caught entering automobiles Wednesday morning... read more