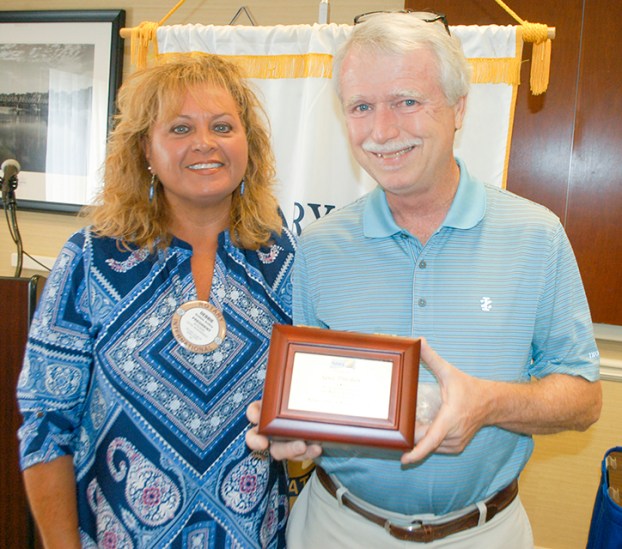 At Thursday’s meeting of the West Point Rotary Club, former club president Gus Darden, right, received a Past President’s Award from current president Debbie Kelley, left. Darden was the president in the 2018-19 year. “I really appreciate this,” Darden said. “I have enjoyed by time with the Rotary Club.” -- Wayne Clark

Ledbetter’s seat is up for re-election on the West Point council, and he’s one of five people running for three open positions on the council. Sandra Thornton, Deedee Williams, Wiky Gladden and Kesha Edwards-Coniglio are also running for the council.

Ledbetter did not openly campaign during his speech, instead focusing on projects the city has in the works. He’s been on the city council for the past 10 years, an era that has seen the start of production for Kia Motors Manufacturing Georgia, the relocation of Atlanta Christian College to West Point and the start of Point University.

“We have seen some amazing things for a town of 3,500 people,” Ledbetter said. “We have led the region in the creation of new jobs, some 15,000. Dymos (Hyundai Transys), Mobis and Kia have all recently expanded, creating more new jobs.”

Ledbetter said that residents of the entire west Georgia-east Alabama region can be justifiably proud of the fact that 40 percent of the new Kia vehicles being sold in the United States were manufactured at KMMG in West Point. Ledbetter also said he was looking forward to a Love’s Truck Stop locating in West Point off Exit 2 on I-85.

“They will be locating on a 20-acre site near the Interstate,” he said. “I really like it that they will have a Hardee’s. Love’s Truck Stops do really good business. The one in Hogansville generates more revenue than any other business in Troup County other than Walmart.”

The holdup with construction of the new business involves the state putting new roundabouts at the exit ramp off Exit 2 and the junction of Georgia 103 with Georgia 18, just up the road. Alabama transportation officials are considering putting one off Exit 70 near the Chambers County Industrial Park.

“I’m not a big fan of roundabouts, but we are going to have to figure out how to use them,” Ledbetter said.

Ledbetter said he was pleased to see such new developments as John Hoggs Park on West Point’s east bank and the Downtown River Park on the west side. Both have splash pads. Ledbetter said that another positive development for the city was the relocation of the police department in a former telephone company building near the CSX Railroad tracks. That freed up the lower level of the city hall building for a community development office.

“It’s where people can go when they are looking for information about the city,” Ledbetter explained.

Ledbetter said that the West Point Development Authority had been doing some good work in the form of purchasing the old woodyard site by the river and property along East 10th Street.

“These are prime locations for redevelopment,” he said.

Ledbetter said he occasionally attends state conventions and meets city officials from other parts of the state.

“They are always asking me how a town our size can do what we do,” he said. “I just tell them it’s by the grace of God.”

The LaGrange Police Department has seen a rise in crashes due to motorists not stopping at stop signs and has... read more