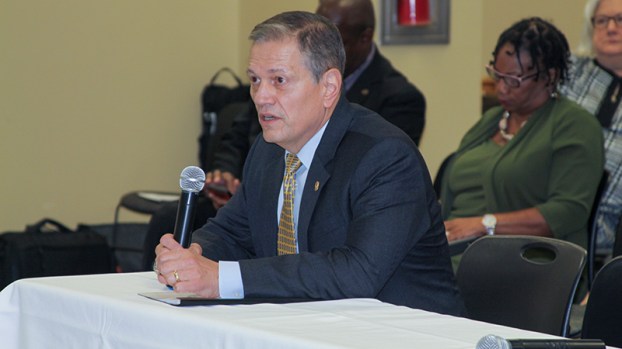 The Georgia House Study Committee on Gang and Youth Violence Prevention met Thursday at West Georgia Technical College in LaGrange to discuss the rising rate of gang violence in Georgia.

The meeting was one of several hosted by the committee in different portions of the state to determine legislative recommendations for the 2020 legislative session.

“We have an issue of 71,000 identified members of gangs [in the state] — 1,400 or so are in my community that we’ve identified,” State Representative Carl Gilliard (D-Savannah), chair of the committee. “We’re not ashamed to look at and call it for what it is. We have a defining moment and a problem, and the only way that we are going to be able to rectify this problem is by coalition, by coming together, by breaking the cycle.”

LaGrange Mayor Jim Thornton, LaGrange Police Chief Lou Dekmar and Coweta Judicial Circuit Assistant District Attorney Jack Winne all addressed the committee early in the meeting, sharing some of the methods used to address gang violence in LaGrange and where the state can help.

“This is an issue that none of us are immune to, and certainly, we have not been immune to it in LaGrange,” Thornton said. “A few years ago, it came to our attention that we did have some significant issues with organized gang activities in our city, and over the past few years, the mayor and council of LaGrange — while working with our police chief and our district attorney and other partners in the state — have really made this a focus for how can we respond both on the enforcement and the prevention side for addressing this issue of gang violence in our community.”

Thornton said he felt LaGrange has made progress in addressing the issue, but he said more work is still needed. Some of the measures the city has taken include hosting LEAD programs in local schools, coordinating with staffing agencies and non-profits to provide access to employment, teen initiatives, creating a regional information sharing task force, having an investigator certified as a gang investigator, helping fund a full-time assigned assistant district attorney for gang-related cases and hosting gang awareness presentations throughout the community. Dekmar said that between prevention and prosecution, the city has seen a major decrease in gang activity over the last few years.

“I think in 2013 we had almost three dozen gang shootings in the city,” Dekmar said. “I think last year we had four, and so far, this year, we’ve had three. So, the result of are very clear, but during that time, we’ve had significant arrest and prosecution.”

Both Thornton and Dekmar emphasized the importance of working together with state and local partners when addressing the issue.

Winne said that the LaGrange community has seen success in curbing gang violence through both prevention and prosecution, and he said that both are needed.

“I do think a holistic approach is what’s required all over the state to address this issue,” Winne said. “I think anecdotally we’ve had success on both sides here.”

“We do the often have cases where someone who has shown a very strong affiliation, a strong association and commitment, but hasn’t yet crossed that line,” Winne said. “Then they’re charged with something, and then they demonstrate to us that they are rejecting the lifestyle. We diverted that. We haven’t sent them to prison, and we had some success there.”

Winne said that getting gang members to give up the lifestyle was the most important goal.

“When we first partook to form this study committee … I began to look over the cities — Atlanta, Columbus, Augusta, Albany — and even for a city of this size, I commend you all because you can see the programs and the effort that is in place in reference to coalition,” Gilliard said.

“This is a model city for the State of Georgia to get involved, and I do want to commend you and the leadership of this city for taking the initiative to say, ‘We do have a problem,’ but also try to focus on addressing it.”

Former NFL player and LaGrange High School graduate Tyrone Poole was also in attendance and began the meeting with a prayer.

The House Study Committee on Gang and Youth Violence Prevention was created by House Resolution 585 during the 2019 legislative session in response to reports that there are over 71,000 gang members or associates across the state. The committee plans to present its recommendation on Nov. 15 in Atlanta.

That recommendation will take into account information from meetings with the Georgia Bureau of Investigation, the Sheriff’s Association, police chiefs across the state, youth program representatives, representatives from prevention programs, economic developers and many others.