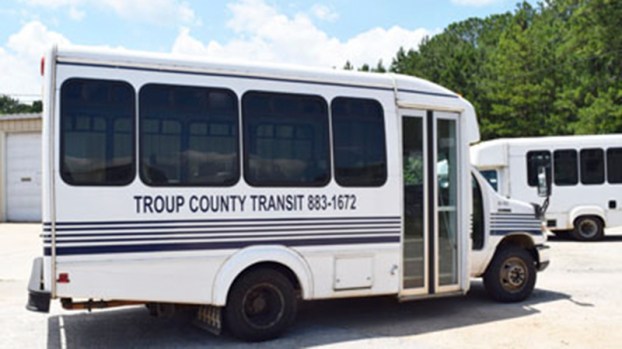 Board of Commissioners hears update on Troup Transit

On Thursday, the Troup County Board of Commissioners heard an update on Troup Transit’s efforts in the county. Troup Transit currently provides roughly 3,700 rides a month to seniors and disabled citizens.

The board of commissioners plans to vote on a request to participate in the FY2021 Department of Transportation Grant application at Tuesday’s meeting. According to Lynn Howard, who is over Troup Transit, the budget for the program will remain roughly the same for the year under consideration, and the county is only requesting funds for a couple of computers and radios in 2021. That equipment is expected to keep the vans up to date, so that they can continue serving citizens.

“We’re still running our transportation to the seniors and disabled at $2 a trip, and then DHS pays us for transporting their clients to Pathways, New Ventures, the senior center,” Howard said.

The county currently has 10 vans, which were purchased from the Georgia Department of Transportation and are used for Troup Transit. The vans are driven by part-time employees between 6 a.m. and 6 p.m. There are plans to purchase two more ADA compliant vans in the future.

While Troup Transit is designed specifically for seniors and disabled citizens, there was some discussion during the meeting over whether future partnerships with large businesses could make it possible to provide workforce transportation.

“One of the things that continues to be brought up is the idea of workforce transportation,” County Manager Eric Mosley said. “That’s one of the major hurdles, obstacles that people have to overcome for unemployment — transportation. I have discussed this with some other transits that do point of service contracts.”

According to Mosley, a point of service contract with a major manufacturer would mean that the county would provide transportation to the manufacturer’s employees from a specified location to that manufacturer’s business every day. However, no immediate plans to provide the service were confirmed on Thursday.

“We know it is a very, very important objective for the county to provide consistent transportation for workforce, and we believe we could be an answer,” Mosley said. “We’ve just got to figure a way to kind of get over that hump.”

Mosley also noted that Troup Transit will likely need to hire a full-time director at some point since Howard has been managing the program while working for Troup County Parks and Recreation. Howard is eligible for retirement, but she has so far opted to remain in her current position.

“I think because we have been so successful in managing our system, GDOT is noticing that and moving money from other counties to us,” Mosley said.

4The Troup County Board of Commissioners received an update on its finances, and the county appears to be on track to remain within its planned budget for the current fiscal year.

4Court services requested a lift of the hiring freeze to fill a vacant position in the drug lab, which the board of commissioners will vote on Tuesday.

4The solicitor’s office requested that the county accept funds from the Voca Grant, which provides funds to assist crime victims. The matching funds for the grant are in the county’s current budget.

4The board of commissioners heard an update on a project which would provide updated aerial photography for the county to be used for emergency services, tax evaluation and other county operations that make use of mapping services.

4The board of commissioners reviewed the agenda for the meeting, which will include public hearings on a home occupation permit and two beer and wine licenses.

The Troup County Board of Commissioners will meet on Tuesday at 9 a.m. at 100 Ridley Ave.

Anyone who has met with Troup County School System Superintendent Brian Shumate in these first few months of his tenure... read more