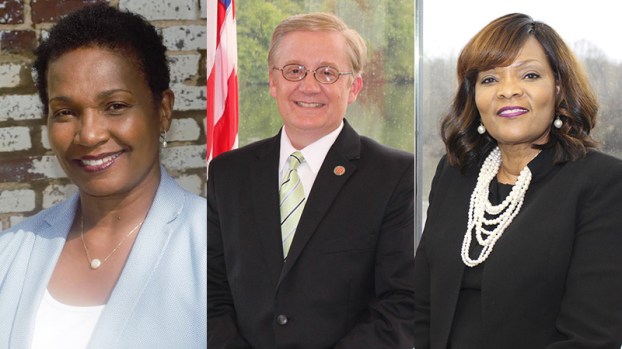 WEST POINT — The West Point City Council will look the same as did before Tuesday night as all three incumbents secured another term.

Thornton obtained the most votes with 422. Ledbetter received 397 votes and Williams rounded out the winners with 340 votes.

Thornton said she was happy with the results Tuesday night and was delighted with the way the election turned out and is ready to serve another term.

“First, I want to thank the voters and the people who came out in support,” she said. “I can’t say enough about those people in the community.”

She said although she has been re-elected, the work is not done and she looks forward to continuing to move the city ahead. However, she also wanted to thank everybody that ran for office, adding it’s not easy.

“Running for office is not easy because you put yourself out there,” she said. “I hope those who ran continue to support the city as we attempt to move forward.”

Ledbetter was also thankful to the voters but wanted to point out two specific people.

“I especially want to thank Bill Edwards for his tireless devotion and volunteering to help with my campaign and to Kris Cagle, who helped me in numerous ways,” he said.

On the campaign trail, Ledbetter said serving on the council is about helping others and talked about continued progress.

“I want to see budget billing put in place and the city millage rate reduced,” he said.

In the closest portion of the race, Williams edged out Gladden by 12 votes. Williams said she appreciated the support of her friends and family as she continues to serve all the citizens of West Point.

“Hopefully, we will continue to strive for excellence and moral courage to reach our fullest potential as a community,” Williams said.

Williams was appointed to the city council this past April after Benjamin Wilcox stepped down from his seat.

Gladden thanked all her supporters Tuesday night and all those who worked on her campaign.

“I just want to congratulate the people who won tonight (Tuesday),” she said. “I hope I can continue to serve West Point in other avenues.”

Edwards-Coniglio also congratulated the winners Tuesday night and said she would remain to share her vision for West Point.

“I am very excited for the candidates that won and wish them the best,” she said. “I have fully trusted the Lord in the race, and I will still remain sharing my vision and love for this city.”

NOTE: Refresh to see updates.  These are unofficial as we are waiting for numbers from the Troup County Government Center.... read more