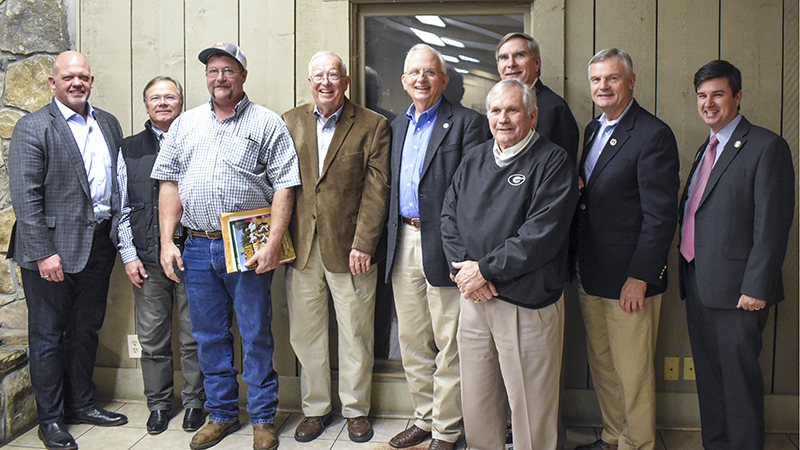 Georgia Agriculture Commissioner Gary Black entertained the crowd with his adventures on the road and plans to market Georgia Grown moving forward.

“We are very fortunate as the State of Georgia to have him representing us as the commissioner of agriculture,” Smith said. “He is doing a great job there.”

As the commissioner of agriculture, Black promotes agriculture and consumer interests in the state, and he spoke at length about the Georgia Grown program, which was created to aid Georgia’s agricultural economy by bringing together producers, processors, suppliers, distributors, retailers, agritourism and consumers.

“We’ve been promoting this idea [of Georgia Grown] for quite some time because when you look there is an opportunity for us as growers,” Black said. “There is an opportunity that we can take to bind together with each other and grab part of that value chain that we’ve not been able to do. Within an hour’s drive of here, there are six million people that will eat our ground beef, that will eat our New York strips, if we simply have a way to get to them in a restaurant and at a retail level.”

Black said that meat production is very different than encouraging people to purchase Georgia Grown strawberries and other commodities because of the value chain. However, he said marketing Georgia Grown beef is still possible.

“People want our Georgia Grown products,” Black said. “We’ve just got to be positioned to take advantage and be part of the value system.”

Black talked about working together with other producers as well as processors in order to succeed, while driving home the importance of marketing Georgia beef. He also talked about economic development as it applies to beef production, listing training future employees for different parts of the process as a high priority.

Black has a personal stake in seeing Georgia beef succeed with 26 female cows of his own.

The Troup County Cattlemen’s Association will meet again on Dec. 17 at 7 p.m. at 21 Vulcan Materials Road in LaGrange. There will be a covered dish meal with Sloppy Pig cooking the meat.